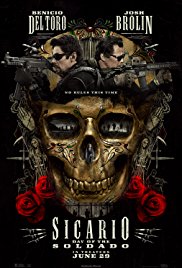 2018 is a year in which good people do bad things. And bad people do worse things.

Taylor Sheridan is the screenwriter who may best capture these days - their skewed humanity and febrile vulnerability. Sicario: Day of the Soldado is his latest expression of our times.

Sheridan was very fortunate in his actors. Sicario had the gifted actress Emily Blunt, and masterly cinematographer Roger Deakins. Villeneuve and Deakins combined again in Blade Runner 2049 (2017). Deakins finally won an Oscar for his work in it.

Stefano Sollima is a director whose priority is brutal violence over character. Unlike Villeneuve or Sheridan, he has done little writing. Sollima directed 10 episodes of Gomorrah (2014-16) for Italian television.

At the beginning of Sicario: Day of the Soldado, he sets a cruel tone.

Alfred Hitchcock once told me about a female critic who accosted him for having a scene in Sabotage (1936), where a bomb exploded near a child. "She was absolutely livid," Hitch said. "And I've never made that mistake again."

Those were the days. Hitch is long gone. Now Sollima is here.

Sicario: Day of the Soldado is a journey into oblivion.

U.S. Government officials set out to create a war between Mexican cartels that begins with a kidnapping. The plan careens out of control and ugly, cruel chaos evolves.

Although a moral character such as the one played in Sicario by Emily Blunt is absent from its successor, the cast is strong. Benicio Del Toro brings quiet, lethal fierceness to the role of Alejandro, who is caught in a wicked web of violence. Isabela Moner is convincing as the daughter of a cartel boss.

Sheridan's script and dialogue is not always at the top of his game, e.g., "You gotta do what you gotta do."

One consideration that may have weakened Sheridan's attention is that he was creating a 10-episode television show titled Yellowstone. He wrote and directed, and it stars Kevin Costner and Gil Birmingham. It's presently on the Paramount Television Network.

Yellowstone also escalates its cruelty and at times is hard to watch.

Sicario: Day of the Soldado is steeped in cruelty. It's a product of its age.

It's a grave new world.