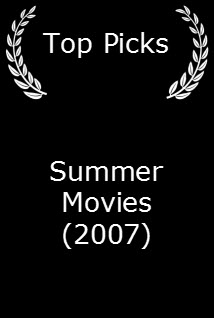 Which is the least promising — the slate of summer flicks or the political candidates who already are blotting out the sun?

Both are prepackaged and presold with berserk calculation.

It’s not the greatest movie ever made. It’s not even one of the two best Spider-Mans. The box office declared it #1. People had voted with their fannies. But when they voted with their minds, in week two, it fell off a whopping 60 percent. Ultimately, audiences were underwhelmed.

Already people are getting their glutei maximi ready for the November 2008 elections. As they do, they might look at this summer’s movies and see some movies that represent candidates who presently are campaigning for the country’s highest office. The recent debates gave us an early insight into the candidates.

Penelope - Hillary Rodham Clinton. Penelope, starring Christina Ricci, is about a woman who is cursed with a pig snout (or an unpopular war).

Evan Almighty - Bill Richardson. God tells Bill to build an ark for Hillary if he wants to be vice president.

Surf’s Up - Denis Kucinich. Surf envy from the Ohio politician, who is patiently waiting to star as Alfred E. Newman when they make a movie about Mad magazine.

Ocean’s Thirteen - The Republican debate. No, it can’t be that. In Ocean’s Thirteen, there are African-Americans (Don Cheadle and Bernie Mac) and an Hispanic (Andy Garcia). None of those at the debate. Also, at the debate at the Ronald Reagan Presidential Library in Simi Valley, Calif., they know that Reagan and Bonzo weren’t related. Three debaters raised their hands to signify they didn’t believe in evolution. (They thought they were proof it didn’t exist, although Clooney is slime).

Rush Hour 3 - Rush Limbaugh. Rush isn’t running for office, but he’s a kingmaker. Or, at least a jester-maker.

Knocked Up - Rudy Guiliani. An addled man desperately tries to avoid the consequences of his previous behavior.

Wedding Daze - Mike Huckabee. Mr. and Mrs. Huckabee are big fans of wedding registries. They should be devotees of this Jason Biggs movie.

Bury My Heart at Wounded Knee — Fred Thompson. Thompson actually is in this TV movie (as President Ulysses S. Grant) as he awaits the remake of Bedtime for Bonzo.

Pirates of the Caribbean: At World’s End — G.W. Bush. Captain Jack is what G.W. wants to be.

Mr. Bean’s Holiday — (Rowan Atkinson). What he actually is.