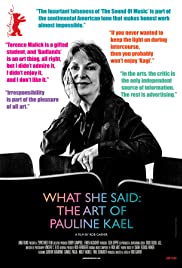 Content by Tony Macklin. Originally published on May 7, 2020 @ tonymacklin.net.

In the age of social media, she would dominate. At her core, she was a canny calculator and a consummate media force.

The documentary What She Said: The Art of Pauline Kael reveals some of the power of personality that Kael exhibited on others throughout her career.

Born in Petaluma, California, she moved with her family to San Francisco when she was eight years old. She attended the University of California, but dropped out and pursued a career promoting movies. She was successful writing popular program notes for The Berkeley Cinema Guild Theatre.

But she was a woman for both coasts - eventually she moved to New York City, and ultimately became movie critic for The New Yorker. Starting on the basis of writing for half a year, she shared that situation with Penelope Gilliatt for 11 years, and then took over as sole full-time movie critic.

As critic in New York, she prospered. I personally knew most of the critics, but I never met Kael. I heard she said that I and critic John Simon had a gay relationship. Of course, it wasn't true. [Is this time for a Seinfeld reference?] Maybe it was because one evening we sat in his living room of his apartment with the lights turned off, because he was avoiding his girlfriend.

I was friends with the incorrigible John Simon, and also the very decent Stanley Kauffmann who gave my daughter a pink stone memento. In theory I probably was closest to Dwight Macdonald and his concept of Masscult, Midcult, and High Culture. I have always been aware of "midcult," films that are popular but phony - at least to me.

I had a dinner out with Andy Sarris, who was Kael's sworn enemy. He drank too much and unburdened his angst about Kael. The interview was more than 70 pages, and I cut it down to just 13. But after his death, I posted the full 55-minute audio on my website.

Later I interviewed his delightful wife, critic Molly Haskell in their apartment.

But Kael was a bridge too far.

I think she would succeed today, because what she did in her career would strike a chord today. She came out against interpretation, as did Susan Sontag.

Kael was anti-academic, and many times anti-intellectual. This would fit very comfortably in 2020.

Kael often saw interpretation as phony. Many times she reviewed the audiences, instead of the film.

What, of course, is ironic is that at her best she was a perceptive interpreter. When Bonnie & Clyde (1967) came out, The New York Times critic, the mediocre Bosley Crowther dismissed it with a negative review. I wrote a cover story for Film Heritage praising the film. But before it was published, Kael had a brilliant piece on the film published in The New Yorker, before she became their regular critic. It blew me away. It was Kael at her best.

Her forte was her discovering and supporting directors such as Marty Scorsese, Robert Altman, and Sam Peckinpah.

But there was the other side of her - a relish to destroy. One of the most famous Kael assaults was at a gathering for director David Lean. She shattered the director. There is footage in What She Said: The Art of Pauline Kael of his speaking of the pain and subsequent effect of the experience.

Kael had hated Lawrence of Arabia (1962), because it wasn't her Lawrence, and she also debunked Ryan's Daughter (1970). She annihilated it and Lean with public vitriol.

When Kael made up her mind, it was game, set and match. Her inability - no, her refusal - to interpret often left her on the surface.

For example, she dismissed 2001: A Space Odyssey (1968), "In some ways it's the biggest amateur movie of them all." Nothing about ambivalence, the satire of human banality. [2001: A Space Odyssey has a good possibility of being chosen by critics as best film of all time in Sight & Sound's decadal poll in 2022.]

She also doesn't get beyond the surface of challenging films such as Chinatown (1974).

Perhaps the quality that most would serve her in 2020 is her understanding of and commitment to branding. Pauline Kael had a vivid brand.

Pauline Kael was the first - and maybe the only - celebrity movie critic. Roger Ebert had his following, but it was his thumb rather than Pauline's acerbic tongue that drew attention. His following was not a cult.

But some of Pauline's following was a cult following. She gathered a group of young novice critics, promoted them, and got them jobs across the country. But it was at a price. They had to pay homage to her.

What She Said: The Art of Pauline Kael includes several of them. They were called the "Paulettes." They included critic David Denby, critic David Edelson and writer/director Paul Schrader. Denby later said, "She insisted she was right about everything... The group became a cult." Edelson says they were "getting opinions from her on high." And Schrader says, "What Pauline Kael promoted wasn't film. It was her."

In recent years, movie critic movie critic Richard Roeper was suspended by the Chicago Sun-Times for buying fake followers on Twitter. Imagine what Pauline might have done.

Director Rob Garver has made an interesting film, given that his subject almost always was interesting. But he avoids some salient topics. I wish he had focused more on the effect that she was Jewish and how at times that informed her criticism. But the only comment was about her review of Shoah (1985) when someone accused her of being a "self-hating Jew." That's misleading. Balance and insight is absent. Denby, Edelson, or Carrie Rickey could have commented on that.

In much of her criticism, Pauline came to conquer, not comprehend.