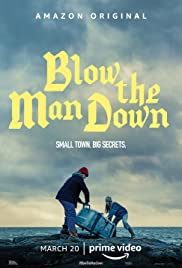 Content by Tony Macklin. Originally published on May 9, 2020 @ tonymacklin.net.

Blow the Man Down is a gust of fresh air.

It is brisk and has unquenchable verve.

Writer/directors Bridget Savage Cole and Danielle Krudy are like female Coen Brothers. They have a personal vision that is both surprising and credible.

Like the Coens, Cole and Krudy have a sharp sense of place. Place is a major character in Blow the Man Down. The movie is set in a seaside village on the coast of Maine, and reeks of salt water, cold air, and fish.

Like the Coens, Cole and Krudy create great roles for women. The Coens are blessed with Frances McDormand, who is married to Joel. Cole and Krudy have assembled a terrific ensemble of actresses and given them memorable roles in Blow the Man Down. They would give McDormand a challenge. And there are more of them.

In Blow the Man Down the characters establish a matriarchal society - women dominate with relish and perception. There is a struggle for control.

Blow the Man Down - an Amazon Original - begins with Mary Beth Connelly (Morgan Saylor) and her sister Priscella (Sophie Lowe) trying to cope after the death of their mother. The death has left them with a house and a barely surviving seafood shop.

Mary Beth wants to escape from the town, but her sister wants to carry on tradition. At night in a village bar, Mary Beth encounters a man, and it leads to a violent ordeal, which has ripples throughout the film. The two sisters try to elude a dire outcome.

Meanwhile a trio of old broads - played by June Squibb, Annette O'Toole, and Marceline Hugot - are faced with a formidable adversary who is in charge of a house of ill repute. She is portrayed with magnificent spitefulness by the force of nature Margo Martindale.

Cole and Krudy create a work of combat. Women at war.

One of the best qualities of Blow the Man Down is its unpredictability. We don't know how things are going to happen. The ending may be a twist too far, but it has a viability.

The matriarchal society deals out ironic justice by the end. All is in order. Or is it?

In Blow the Man Down men make noise, but have little impact. Many are relegated to a Greek-like chorus of fishermen belting out a sea shanty.

I can't remember a film where I was more aware of a coming matriarchy since the end of Once Upon a Time in the West (1968), where Claudia Cardinale walked down the hill to give the railroad workers water.

So I give you fair warning, Blow the Man Down blows man down and away.

May he rest in peace.