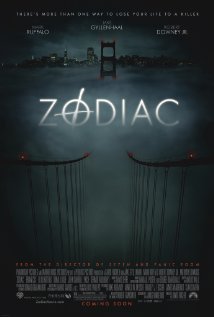 Zodiac is a thinking person's film. It isn't a mass audience movie.

Although it received an 85 from critics as compiled by Rottentomatoes, Zodiac opened weaker than expected at the box office.

Audiences expecting Zodiac to be a cackling maniac wielding a bloody saw will be disappointed. Zodiac has a few thrills, but it is not a thriller. Those looking for a movie that challenges will find a lot in Zodiac to decipher.

Directed by masterly David Fincher, Zodiac is full of meaningful themes and

significant style. It is a deceptively textured film. The script -- which is full of intriguing dualities -- was written by James Vanderbilt, based on books by Robert Graysmith.

Zodiac is the story of the real-life serial killer who terrorized Northern California from the late 1960s through the early 1970s. The film begins with Zodiac's attack on July 4, 1968, on a young couple in a parked car in an isolated area on the outskirts of Vallejo, Calif.

We switch to the newsroom of the San Francisco Chronicle, and a meeting of the editorial staff that is interrupted by the delivery of a letter from someone who calls himself Zodiac. In the letter he identifies himself as a killer and demands his correspondence be printed on the front page or he will go on a rampage of killing. The letter is accompanied by the portion of a cryptogram that Zodiac says will identify him.

Zodiac follows the chase, its effects, and its psychological cost on those who can't let it go.

Downey is his usual sardonic, irrepressible self, Gyllenhaal and Edwards are convincing and Mark Ruffalo gives the best performance he's given since You Can Count on Me. The rest of the cast is first-rate.

But even more important than cast in a Fincher film are theme and tone. One of the most important themes in Zodiac is the relationship between the past (the late 1960s and early 1970s) and the present. The past is almost a foreign country its tools are so different from today, but Zodiac and his influences were precursors of the present.

Zodiac was a harbinger of the celebrity culture. He was a master of self-promotion, and the media rushed to make him a figure that would terrify the public. Things haven't changed.

Nancy Grace, Glenn Beck, Geraldo, Anderson Cooper, et al. would be absolutely orgasmic if they had a chance to babble about Zodiac.

Fincher also reveals how drastically the world has changed electronically from the 1970s. In Zodiac, one character has to run outside to a phone booth in the rain to make a phone call. The first Atari video game -- the rudimentary PONG -- plays on a TV. Now shrill cell phones and bombastic video games are everywhere. Books are not.

And in Zodiac the different police departments are unable to communicate basic information because they don't have the equipment to do so.

But the irony -- remember this is Fincher -- is that what hasn't changed in the 21st century is the flow of misinformation, misinterpretation and downright mendacity. Better tools, same old falsity. It's simply more sophisticated.

Fincher also emphasizes the beginning of the squandering of due process of law. Some of the cops in the film try to hold on to that slippery concept, but Dirty Harry is in the theatres. Dirty Dick and Incurious George will hold sway in the future.

One of the stars is the production designer Donald Graham Burt, who creates a look of normalcy and ordinariness, often drab, sometimes dingy. The prime suspect, although a child molester, appears very ordinary.

Burt uses orange and taupe (brownish gray) to color this world. Amber, the color of warning, dominates. Shirts, a VW car, furnishings and a crucial chair are all orange. The look of the picture is one of the major characters.

Zodiac is a movie about a serial killer, but it's more about the world we lived in and live in. As one of the police officers says about capturing Zodiac, "What if, what if, what if . . . ?"

It's an age-old question. It's Fincher's anthem.

In Zodiac, David Fincher creates a world of anxiety and confusion. It reverberates all the way to the present.