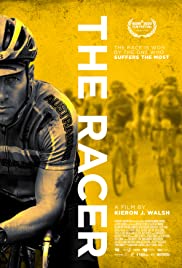 The Racer is a stylish, engaging, informative indie.

Although it is fictional, it is based on the 1998 Tour de France, which actually had its early stages in Ireland. It also had a doping scandal that influenced the sport of cycling.

The Racer has especially gifted performances for an indie. They give the film credibility.

The Racer focuses on Dom Chabrol (Louis Talpe), a cyclist near the end of his special road. He is a member of a cycling team competing in the early stages of the Tour de France in Ireland. He is a veteran, but he is expendable as he grows older. He is a "domestique" - a support rider - a pace setter who never wins. As he explains to Lynn Brennan, a young doctor (Tara Lee), "I'm not supposed to win."

Competitive cycling is his life. "Without a bike, I'm nobody," he explains to her.

Sonny McElhone (Iain Glen) is the team masseur, and Dom's long-time friend. Sonny gives him special blood transfusions and injections. Dom says, "I just want to be fit, ok?" Which of course is an irony.

Eventually Dom is released and replaced by another rider, but fate brings him back to action. There is a life-changing event that affects Dom.

The Racer is nicely directed by Kieron J. Walsh. The screenplay was written by Kieron and Ciaron Cassidy. The one lapse is that in the major theme of natural family versus professional sports family, the natural one is almost nonexistent. That means the choice has no gravity.

But the film captures the playful camaraderie of the teammates, and the painful stress on the individuals. As well as the spirit of the races.

The acting creates the strongest sense of humanity. Belgian actor Louis Talpe may remind one of Guy Pearce with a soupcon of Hugh Jackman - as he emits quiet strength and vulnerability. Iain Glen, who plays Sonny, is one of the most underrated characters actors in the business. His combination of slyness and gruff sternness is a rare gift. Tara Lee, who actually is from Dublin, renders an appealing performance as the young woman who helps Dom.

The bicycles give The Racer its speed, but the acting gives the film its stature.