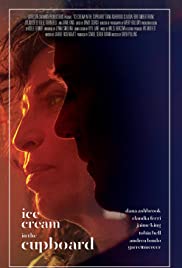 One of the staples of my criticism is - does the film accomplish what it sets out to do? Or does it miss its mark? The critic doesn't set the mark, the filmmaker does.

Ice Cream in the Cupboard is an indie that accomplishes what the filmmakers were after.

It is not a film that I was anxious to see. But it is worth seeing.

Ice Cream in the Cupboard is based on a non-fiction book that Pat Moffett wrote about his own experience with his wife Carmen, who went through the harrowing ordeal of early-onset Alzheimer's. He has said, "It's a Carmen story, not a Pat Moffett story."

But Pat wrote the book, and is executive producer of the film. He comes off very well in the film.

Moffett is fortunate that actor Dana Ashbrook plays him. Ashbrook is handsome and intelligent, and he uses those qualities to advantage. He is appealing. He is sympathetic even when he is bewildered.

Claudia Ferri has a much more difficult role as the ill-fated Carmen, but she handles the struggles effectively. It is not a sympathetic role, despite its basis. Violence at times comes before forgetfulness. But she makes it credible.

Screenwriters John Rae and Jarret Rosenblatt make some changes from the book. They drop the children the couple are raising down from five to two. - excising Carmen's three from a previous marriage. Both Pat and Carmen had previous marriages.

They change a crucial scene that becomes the best scene in the film. In actuality, in the book, Pat found Carmen in the rain on a golf course. In the film it's bright daylight and Pat takes out his rage on objects on the golf course. It's an exhilarating moment.

Drew Pollins directs with deftness - from playfulness to rage.

Ice Cream in the Cupboard humanizes an inhuman experience.