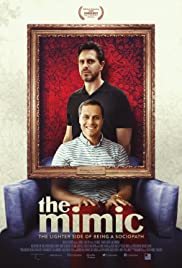 The Mimic is an uncreative film about creativity.

Thomas Sadoski is an accomplished actor, but he is unable to carry the indie film. Bearded of course -- who isn't these days? -- Sadoski plays The Narrator, a widower who is a writer.

He comes across the Kid (blandly played by Jake Robinson) who is his neighbor.

The Kid appears to be a character that The Narrator is trying to create. The Narrator comes to think The Kid is a sociopath. You can see the clutter already.

Director Thomas F. Mazzioti in The Mimic writes his first original screenplay. It lacks clarity, chemistry, and punch. There are too many scenes that rely on listless dialogue.

Late in the film, The Narrator says to The Kid, "You actually said something original." Hardly.

The only notable aspect of The Mimic is its collection of veteran actors -- Jessica Walter, Didi Conn, Gina Gershon, Marilou Henner, M. Emmet Walsh, and Austin Pendleton. Austin -- what's happened to your career. What's up, doc?

The veterans are dusty cameos.

The Narrator says The Kid always said, "We're on the same wavelength."

Unfortunately in The Mimic, the same wavelength is vapid static.