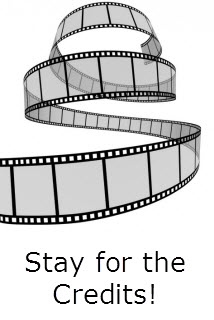 As Yogi Bear -- or one of his sources -- once said, "It's not over 'til it's over." He should tell that to moviegoers.

Recently I was discussing X-Men: The Last Stand with a young fan of X-Men who had just seen the movie. He was shocked to find out that Professor Charles Xavier (Patrick Stewart) probably still is alive. He didn't stay until the end of the credits when we hear Xavier's voice and come to the conclusion that somehow Xavier still lives.

It's almost unfair for moviemakers to hold a trump card until after the audience has left the theater, but more and more they do. How many people, who left the movie before the credits ended, have a false idea of a movie? The majority. Xavier lives, damn it!

One of the first times I realized that important action can accompany credits was when I first saw Apocalypse Now (1979). Director Coppola has battled with several endings, but the one in the original release played to an audience of one in the theater in which I saw the film.

As the credits started to appear, the audience left the theater. I was the only one left as Captain Willard (Martin Sheen) called in a bomb attack. As the screen lit up with explosions, I wanted to call out, "Come back, look what's happening. It's incredible!" But I was alone; there was no one with whom to share the awe. It fell unseen and unheard except for a single pair of eyes and ears.

Sometimes something -- as in Apocalypse Now -- happens that reveals a crucial piece of the puzzle. In Brian DePalma's Snake Eyes (1998) with Nicolas Cage, during the credit sequence we see a significant clue in cement that answers an otherwise unanswered question. But hardly anyone is there to see it.

I feel sorry for the cineastes that left before the credits ended for Jonathan Demme's The Truth About Charlie (2002). After the credits there is a wonderful shot of director Francois Truffaut's grave in France. It suggested that American director Demme was paying loving homage to the French New Wave films, especially those of Truffaut. Suddenly Charles Aznavour's and Anna Karina's appearances in Demme's movie had an extra punch. But no one stayed to see the elegaic shot of the grave.

Jeff Anderson, a film critic based in San Francisco, didn't remain for the entire credits and missed the shot of the grave. "Jonathan Demme himself had to tell me about it. Talk about embarrassing," Anderson told me.

I didn't stay for the credits of Harry Potter and the Chamber of Secrets (2002), and so I missed the shot of a store window in Diagon Alley featuring Gilderoy Lockhart's newest book, entitled Who Am I? Kenneth Branagh is on the cover, wrapped in a straitjacket and squirming around, looking utterly confused. It is an amusing bit I didn't know about until someone told me. Shame on me.

Sometimes the credits have revelatory effects. During the final credits of Martin Scorsese's Gangs of New York (2002) we hear modern traffic sounds which connect the past to contemporary New York. It is a telling effect.

At times a director uses the end of the credits to make a personal and heartfelt dedication. Scorsese dedicated Raging Bull to his teacher at NYU Haig P. Manoogian, who died in 1980, the year of the film's release.

Steven Spielberg, at the end of Catch Me If You Can (2002) dedicates the movie to his friend, the late Bruce Paltrow (the father of Gwyneth).

Recently, the credit sequence of Cars cleverly relates past Pixar movies -- John Ratzenberger was in seven -- to their present venture. It's one of the best parts of the movie.

The credits have various different possibilities. They are not just a dull list of gaffers, or self-indulgences. Often they add personal, meaningful touches.

But expecting audiences to stay for the credits is like asking them to cuddle after they've had their way with the movie. It seems it just isn't going to happen.