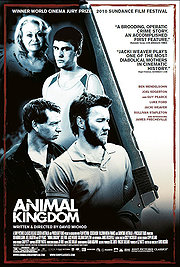 Australian film -- which had a boom during the 1970s and 1980s -- is ending the present decade with a bang in the form of the brilliant Animal Kingdom. Actually several bangs and a whimper.

Not only does Animal Kingdom keep the Australian cinema potent, it breathes invigorating life into the crime genre.

But the vivid breath it emits is the odious breath of the urban jungle. Animal Kingdom is a habitat growling and roaring with menace and creativity.

Set in Melbourne, Australia, Animal Kingdom is the engrossing story of the Codys -- a working class family whose work is fading. Their normal work happens to be robbing banks, but the forces of law and time are breaking them down. The police -- many corrupt -- are encroaching. The family is unraveling.

The voice of some shaky reason in their unreasonable world and the most civilized member of the gang is Baz (Joel Edgerton), a colleague who tells one of the brothers to get into the stock market as he has.

That brother Pope Cody (Ben Mendelsohn) dismisses the idea, because he says he has none of the tools for investing. Pope is the family's sociopath. He's off his meds, and is a figure of dangerous unpredictability and ominous impulse.

Craig Cody (Sullivan Stapleton) is a tattooed druggie and has made a lot of money dealing drugs. Baz thinks, "it's grubby." The weakest son in the family is Darren Cody, who is the mom's baby.

In 1949 in White Heat, Cody (James Cagney) screamed the classic line, "Made it, Ma! Top of the world." His mom obsessed him.

In Animal Kingdom, the controlling matriarch of the Codys is their mother Janine (Jacki Weaver) -- called Smurf. She is not at the top of the world; she's down under in Australia. But like Cody Jarrett's mother, she too has lethal sway over her family.

The mother kisses her sons on the lips, sits on the lap of one, and gives them caresses. She's the Mamma Grizzly of Australia. But she has a cold steel trap under her comforter.

Into the Cody zoo of iniquity comes 17-year old J (James Frecheville) to stay with his doting grandmother and uncles after his mother has died.

J is stone-faced and vulnerable, but also wary. He's impressionable, but growingly he is aware that the Cody clan is dangerous.

Animal Kingdom has J's voice-over narration about his life-changing experience with the Codys. Can he survive the feral pull of the ferocious family.

Director/screenwriter David Michod -- educated at the University of Melbourne -- uses his knowledge of the area of Melbourne and its crime history to create a terrific personal film.

Michod creates an atmosphere that is engrossing and involving. Michod is a talented creator of character, but his main character may be menace -- it hums throughout his film. Violence is sudden and abrupt. It's always just off-screen waiting to leap like a terrible, hidden predator.

Michod is helped immensely by the original music of Antony Partos and the totality of sound. The sound in Animal Kingdom is dramatic and suspenseful.

The editing of Luke Doolan slows the pace and increases the simmering tension.

The cast is first-rate with some of Australia's foremost actors. Frecheville is convincing as the young, inchoate J. English-born, Australia-raised Guy Pearce is effective as the sober detective, who is not as perceptive as he thinks he is.

Michod wrote the role of the mother for Jacki Weaver, and she seizes it with aplomb. Smurf is a master of manipulation behind a pleasant smile. Smurf is pragmatic but tries to be positive. At one point she says she is, "having trouble finding a positive spin." Weaver captures her deceptive guile.

In Animal Kingdom, David Michod has brought chilling fatalism to the human condition.

In Animal Kingdom, Michod stalks his prey. The prey turns out to be the audience.