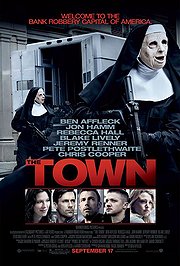 As director, Affleck is more Clint Howard and Yosemite Sam.

Affleck has been getting raves for his direction of The Town. He has a knowing sense of place, but his movie is cluttered [no Eastwood there], the plot is garbled, and his violence is repetitive and uninspired [no Peckinpah there].

If I hadn't seen Animal Kingdom -- a much better film -- recently, I might have been more impressed by The Town. Where Animal Kingdom is full of surprises, The Town is predictable and conventional.

The Town isn't rotten, but neither is it fresh. It's bogged down by Hollywood wheezes of plot and character.

You pretty much know early on what happened to the mother. And the foreboding inevitability stays properly intact.

The Town -- set in the blue-collar Boston neighborhood of Charlestown -- is the tale of Doug MacRay (Affleck) and his gang of bank robbers. They are pros, and Doug is a smart, prepared leader.

In a robbery that goes somewhat awry, one of the gang members grabs the bank manager Claire (Rebecca Hall) as they escape. They've worn

skull masks, and she is then blind-folded, but did she see anything? They let her go on a rocky beach.

Subsequently Doug establishes a relationship with the unsuspecting Claire to find out what she knows. Of course, they fall in love. It's Stockplot syndrome.

Affleck may have made the movie with the worst gun firing in the history of movies. The gang may be successful bank robbers, but they sure are lousy shots. The Cops and FBI are worse. Never did a movie with as much firepower have less hits. They do shoot up a lot of vehicles.

Affleck himself would say, "Well, to tell you the truth, in all this excitement I kind of lost track myself."

Affleck co-scripted with Peter Craig and Aaron Stockard from a novel by Chuck Hogan. Dean Resiner and the Finks they're not.

Affleck does nail two action sequences, before the bloated conclusion. The opening bank robbery is effective, and the car chase through the narrow street of Boston is a keeper. Boston challenges Chicago (The French Connection, 1971) and San Francisco (Bullitt, 1968) as a setting of unforgettable car chases.

Jon Hamm, as FBI Special Agent Adam Frawley, takes a respite from tv's Mad Men, but his accent is erratic. In one scene he turns up the Boston accent; in the next he pretty much forgets it. His character doesn't take a single drink -- maybe his inner Don Draper needs one.

Chris Cooper has a powerful scene as Doug's dad, whom the son visits in prison.

Affleck, as actor, calls on his outer Sly Stallone -- he's buffed -- as the willful townie, who is transformed by love. "Yo, Claire."

Doug is a former hockey player who was drafted by the pros but failed. He's off drugs and looking for a bright day.

Ultimately, The Town is a slam-bang, raucous action film that is not as authentic as it thinks it is.

After the movie, there is a credit statement that most of the people of Charlestown are really swell.

I don't think either Clint or Sam would have included that sop.