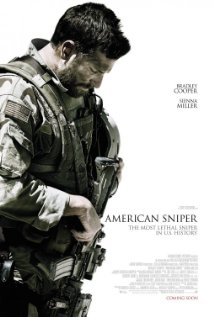 The old man is back.

And he's back with thoughtful, raging force.

Not only is 84-year old Clint Eastwood back in directing American Sniper, he's broken the mold and put it together again with renewed verve and vitality.

American Sniper is an almost-miraculous achievement.

There is little if anything in his recent films that would suggest that director Eastwood would be able to make a film like American Sniper.

And this year's Jersey Boys seemed like an old man trying to remember how to dance.

It seemed as though Million Dollar Baby (2004) would have made an apt finale for Eastwood, especially near the end with Clint walking down the hall of a hospital and out a door into darkness. But then there was Gran Torino (2008), which Eastwood starred in and directed. Gran Torino was the last movie that seemed like essential Eastwood.

Everything that followed seemed negligible.

But American Sniper has blown them all away. It's essential Eastwood at its core.

American Sniper is based on an autobiography by Chris Kyle, written with Scott McEwen and Jim DeFelice. It's the story of the life and times of Kyle, who had four tours in Iraq, totaling circa 1,000 days, resulting in more than 160 kills credited to him as a sniper. The film is about his experiences and the costs - emotional and psychological - they had on him. It's about how punishing the American Dream can be.

American Sniper does not begin promisingly. It has unoriginal scenes of boyhood and Kyle's formative days. The screenplay by Jason Hall has a lot of cursing early. Is Clint trying to be relevant by using the word "fuck" much more than he ever has in his films? It ain't gonna work.

The film languishes until conflict invades it. Eastwood's best films are steeped in conflict, e.g., between Harry Callahan and Scorpio in Dirty Harry (1971) or between William Munny and Little Bill Daggett in Unforgiven (1992).

When Kyle (Bradley Cooper) comes in contact with conflict, it identifies him. His sniping kills make him "The Legend." He has to seek out and try to kill The Butcher (Mido Hamada), and ultimately Mustafa (Sammy Sheik).

Mustafa is a Syrian, Olympic sharpshooter, who is an ace sniper. In a way he's Kyle's doppleganger, as Scorpio was Callahan's.

Dualities thrive in American Sniper: the two lethal snipers, the two Kyle brothers Chris and Jeff, the two children of Chris and Taya, the two sons who go through a hunting ritual, and pairs of victims in Iraq.

American Sniper is visceral. Eastwood unleashes his inner Tarantino. The violence is galvanic - at times excruciating. The wit is sly. The humanity is rampant.

Eastwood, like Tarantino, is a personal filmmaker, and one who relates to past films, his own and others. It must have struck a chord in Eastwood, when he came upon Chris Kyle. Clint's oldest son is named Kyle. And in Don Siegel's Dirty Harry, when Harry runs down the steps into a subway, the word KYLE is spray-painted on the wall in large letters, a reference to his star's son.

Eastwood has often written the music for his films. In American Sniper, he wrote "Taya's Theme," but it's basically limited to when Chris and Taya are together intimately. It's just a few notes on the piano, but at least this time it's not tinkling.

A wonderful use of music is the final funeral anthem - by Ennio Morricone. Please stay until it's over. It's evocative and stirring. It's an extraordinary use of music.

What makes it extra special is that Eastwood lifted it from the spaghetti western The Return of Ringo (1965). That film was directed by Duccio Tessari, not Sergio Leone, but it takes Clint back to Morricone and Clint's spaghetti western roots.

What is also remarkable in American Sniper, along with its power, is its restraint and subtlety. The soundtrack is silent as the credits roll. Eastwood doesn't milk his scenes; he cuts away. He leaves them resolved but doesn't need to show what we assume or know will happen. The movie's "final" shot is the simple closing of a door. [There's a line of explanation on the screen, followed by another sequence.]

There's a formidable intelligence in the film. I'm not sure how much of a fan I am. Clint and I don't share the same sensibilities and values. But we meet in art. He's been an important part of my life. [It means nothing, but I'm intrigued by the fact that my mother and daughter were each born within a day of the date of Clint's birthday.]

I sat next to Clint for an hour and 45 minutes and interviewed him when he was promoting Million Dollar Baby. He was gentler and better read than I had known. Years ago, I taught a college course on Clint.

With Unforgiven, many people think Eastwood brought the genre of the western to an end. If so, American Sniper gives the western an afterlife.

But it's a different western. In the contemporary shootout in American Sniper, the two adversaries are a mile apart. The enemy in Iraq more than once is referred to as "savages." The climactic battle is in a dust-driven hell. Of course, Chris Kyle is a Texan. Kyle was called "The Legend," and we know the fate of many legends in the west.

In American Sniper, the western may still exist - in new locations, with new weapons, and new ordeals.

Eastwood has gathered his veterans together to make American Sniper, working at peak capacity. The cinematographer Tom Stern was a gaffer on Honkytonk Man (1982) and became Eastwood's director of photography on Bloodwork (2002), beginning a long collaboration.

Co-editors Joel Cox and Gary Roach have history with Clint. Cox started as a mailroom boy at Warner Bros. and edited The Enforcer (1976), directed by James Fargo. He won an Oscar for editing Unforgiven. Roach started with Letters from Iwo Jima (2006).

The cast is formidable. Bradley Cooper is credible and substantial as evolving Kyle. Sienna Miller is believable as the sweetheart and wife under duress. Mido Hamada (tv's Homeland and 24) is strong as the brutal Butcher. And Sammy Sheik - he of the long eyelashes - is convincing as the Syrian sniper.

Eastwood's film is not as political as Chris Kyle's book. Despite his notorious conversation with a chair, Eastwood usually avoids politics in his films. Both conservatives and liberals can relate to the artistry, subtlety, and scope of American Sniper. Probably in different ways. That's part of Eastwood's mastery.

Clint Eastwood has his dramatic muscle back.

In American Sniper, he delivers a transcendent wallop.