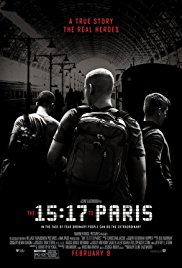 The empty chairs have taken over. It has non-actors playing the leads and an unqualified person writing the screenplay. Sad.

Clint Eastwood directed the film based on an actual event. On August 21, 2015, three Americans on a train traveling from Amsterdam through France subdued an armed terrorist who threatened disaster. The three Americans are portrayed by Alex Skarlatos, Anthony Sadler, and Spencer Stone, who actually experienced the event themselves.

We follow them on vacation. One selfie of these guys would be enough.

The writer of the awful screenplay (based on a book) is Dorothy Byskal, whose credentials are that she was staff assistant on Sully (2016) and most recently production secretary on Logan (2017). She's not exactly a master of dialogue. Or plot. Or character. Or language.

The project must have seemed like a good idea. It wasn't.

I've always harped on the concept that a "true" story must be made truly to retain its truth. A true story told dully is a dull story; a true story told banally is a banal story. It is no longer true.

At the beginning of Fargo (1996), it says on the screen that "This is a true story." But it never happened in actuality. However, the Coen Brothers told it truly. Therefore it turned out to be a true story.

In The 15:17 to Paris, Eastwood, his non-actors, and his non-writer shamble past truth, and substitute mediocre pretense.

Another irony about The 15:17 to Paris is that Eastwood has always seemed to care about his screenplay. Many of his films come from novels and short stories. The failure of Byskal is not a gender thing. Clint got a wonderful screenplay from Iris Yamashita in Letters from Iwo Jima (2006). Although it may not be emphasized Clint, like Hitchcock, has always counted on effective writing. Not this time.

At times Dorothy Byskal seems to be leaning toward a religious tract. Spencer's mother (Judy Greer -- an actual actress) informs her son that God has told her He has exciting plans for him. Yikes.

The three heroes met at a strict Christian high school. In interviews Spencer and Alex say, "God was on our side." Fortunately, for the Eagles He recently had time to help Foles win the Super Bowl [or as He might say, "The Big Game"].

And Byskal gives them dialogue such as when Spencer says, "Ah, shut the heck up." This is a soldier on vacation who obviously would talk like this.

Why would Eastwood create a film like The 15:17 to Paris? He's always emphasized patriotism, but hardly ever has he been comfortable with religion in his films. Maybe approaching his 88th birthday on May 31, he thinks it is about time.

Ah, what the heck.