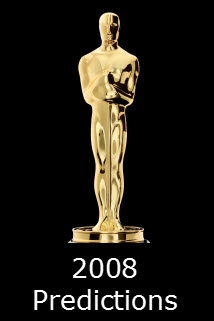 Clint's recent films have received multiple Academy Award nominations: Mystic River (2003), Flags of Our Fathers (2006), Letters from Iwo Jima (2006), and Million Dollar Baby (2004), which won the Academy Award for Best Picture, and for which Clint won the Oscar for his direction.

But all good things must come to an end.

Clint didn't get a nomination for his performance in Gran Torino, as most people thought he would. His two movies released in 2008 only gained one nomination -- Angelina Jolie for Best Actress in Changeling.

The Big Dog has been run out of town by the little mutt. Slumdog now rules the Hollywood pound.

Despite receiving no acting nominations, Slumdog will prevail.

There will be very few contested categories. Here's a look at the main categories:

I think Frank Langella gave the best performance of the year as the hearty, angry, cunning former president in Frost/Nixon. But Langella is basically a New York stage actor, which has little appeal in Hollywood.

I love that Richard Jenkins got a nomination for The Visitor -- probably at the expense of Clint Eastwood.

The best actor competition seems to come down to Mickey Rourke, as a broken-down scrapper and Sean Penn who was brilliant as Harvey Milk.

Penn has won before for Mystic River, and Rourke has come back from a moribund career, which he seemed to have trashed beyond repair with harrowing personal behavior.

Penn and Rourke are both rebels, but Rourke has ruffled even more feathers in Hollywood. How much will that cost him? Rourke will get the sympathy vote. That may be enough.

Which actress was in a film that referenced the holocaust? Kate Winslet in The Reader. So she's the winner.

No female performance stood out this year as the best.

The always proficient Meryl Streep has a chance for Doubt. Anne Hathaway (Rachel Getting Married) and Jolie, were solid. Melissa Leo received a deserved nomination for enduring the cold in the independent Frozen River.

I'm rooting against the overrated Winslet, but to no avail.

Ledger died last year, and also gave the best, most creative performance. No contest. Ledger will win in a moment of ironic, black comedy that would be worthy of The Joker.

Cruz is the only nominee from Woody Allen's terrific movie. Allen's screenplay, which didn't even receive a nomination, was the best script of the year.

Marisa Tomei, of The Wrestler, is my best longshot of the evening, but Cruz is popular and was compelling as the fiery, feisty ex-wife in Vicky Cristina Barceona.

Boyle has swept the directing awards so far -- including The Golden Globe and BAFTA. Most significant is that he won the Directors Guild Award.

Boyle is an engaging guy, who wears his heart on his Nehru jacket.

This is a lock. I keep trying to find a way that Slumdog won't win I can't. It's on an unbeatable streak.

Usually English-directed films that win are epics -- e.g., Gandhi (1982), Lawrence of Arabia (1962). Even though Slumdog was made in Mumbai, it seems a small film. Entertaining but forgettable.

Slumdog Millionaire may fit 2008-2009, since it is a feel-good movie, that rises out of the muck -- like the recent presidential election in the US.

Originally I thought Frost/Nixon would appeal most to the Hollywood industry, but it didn't.

Milk seems the best runner-up (as do Gus Van Sant for Director and Sean Penn as Actor). The Curious Case of Benjamin Button has left the industry incurious.

The Reader, despite Kate's histrionics, has no chance.

It's Slumdog Millionaire all the way.

I hope I'm wrong, and the Oscars will be less predictable than I think. Maybe Mickey Rourke will perk things up.

At any rate I'm bringing booze to toast Mickey's win. Or loss.

Let the industry have its Slumdog.

This year I think I'm going to need hair of the dog.

The Curious Case of Benjami...