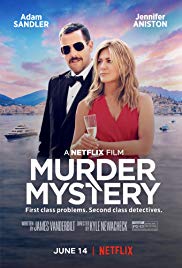 The indie Murder Mystery, on Netflix, is a stumbling romp. But since Jennifer Anniston and Adam Sandler are doing the stumbling, it's pleasantly glib.

Murder Mystery is the tale of a married couple Nick Spitz (Sandler) and his wife Audrey (Anniston), from New York, who go on a trip to Europe to celebrate their fifteenth anniversary.

On the plane, in the middle of the night, Audrey walks into an isolated bar in first-class. She meets the only person there - the wealthy Charles Cavendish (Luke Evans). He invites her and her husband to go on a yacht when they arrive. But Nick is reluctant to go, since he has booked a trip on a tour bus. However, when he and Audrey see the motley crowd around the bus, they join Cavendish.

The yacht is the scene of a family gathering for the birthday of the arch patriarch (Terence Stamp). Murders ensue, and the Spitzes are on the case.

Murder Mystery is a lively hodgepodge of Agatha Christie, Inspector Clouseau, and Murder by Death (1976).

It doesn't seem to register well with its target audience. Its rating of Murder Mystery by audiences on rottentomatoes is low. It's probably too quirky.

Sandler's audience prefers goofy to quirky. But at times he tries to extend himself. This is not one of those times - although there are signs that Sandler wants more. The screenwriter for Murder Mystery is James Vanderbilt. [The director is Kyle Newacheck.] Vanderbilt wrote the screenplay for Zodiac (2007), directed by David Fincher. Murder Mystery is no Zodiac.

Sandler once tried to turn serious with director/writer Tom McCarthy. McCarthy wrote and directed The Cobbler (2015) for Sandler. It was disastrous. Sandler is more shtick than McCarthy's humanism.

McCarthy went back to his roots when he co-wrote and directed Spotlight (2015), which won the Academy Award for Best Picture of the Year.

Recently McCarthy has returned to making his characters human this year when he wrote the premiere episode of The Loudest Voice about Roger Ailes on Showtime television.

Maybe Sandler can find a project in the future to fulfill his serious side. But he's been typecast. His wit is half-speed. In his best roles - e.g., The Wedding Singer (1998) and 50 First Dates (2004) - Sandler had a soft edge of sweetness.

Sandler simply is amiable not sweet in Murder Mystery. The film has several twists. The last is one twist too many.

But Murder Mystery delivers entertainment for audiences willing to go on a facile joy ride.