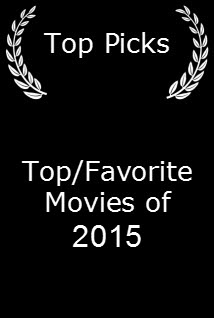 Much of 2015 was a lackluster year at the movies. As has become the routine marketing strategy, most of the best films were held for release and awards consideration until November or later.

One of the prevailing themes of the films of 2015 was the revelation of the fallible power and abuse by institutions. Concussion went after the NFL, The Big Short went after the banking industry (sort of), Spotlight investigated the Catholic Church, Trumbo exposed the government, and even Star Wars: The Force Awakens faced The First Order.

Many of the best film directors didn't have any releases in 2015. Martin Scorsese, Christopher Nolan, David Fincher, Clint Eastwood, and the Coen Brothers were absent.

There were few films in 2015 that have any chance to be classics. Perhaps The Hateful Eight does, because of Quentin Tarantino's dazzling oeuvre.

In general, 2015 was not a memorable year at the movies.

As an interpretative critic, I hope for films that will challenge me to go beneath their surface to discover, explore, and understand.

The following ten films gave me some of my best experiences in the theater.