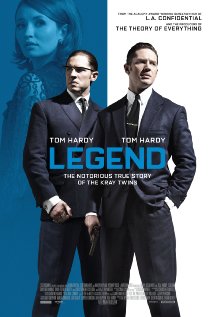 Where have all the Tom Hardys gone?

At the beginning of the year, when I heard that Tom Hardy was going to play both the infamous, English Kray brothers - twins - I thought he was a cinch to win the Oscar as Best Actor.

[Only an actor whose character had a disease could beat him.]

Of course, Hardy is terrific as the mismatched kin.

The ensemble casts of Spotlight, Trumbo, and The Big Short are getting raves.

Hardy is an ensemble all by himself.

Hardy's performance - though appreciated - has not had the groundswell of support it deserves. He hasn't even been mentioned in the mob of contenders for Best Actor.

Much of the dismissal is because some reviewers think Hardy is in a bad film. It's not. And remember Liz Taylor won an Oscar as Best Actress for Butterfield 8 (1960). Now that's a bad film.

Another reason why Hardy has been ignored is that the Kray brothers speak with almost indecipherable East End London Cockney accents. A letter to the LA Times said they had walked out 40 minutes into the movie, because they couldn't understand the dialogue. They wanted subtitles. Once again, the audience complains, because it's not easy enough for them.

If one can relate to the garbled language in Legend, it's funny. The Big Short has been sold as a comedy, but Legend is funnier. The absurdity is daft.

If only Legend had the charts, diagrams, and explainers of The Big Short. If only Tom Hardy had The Big Short's publicity team behind him.

Another reason Hardy's superb performance in Legend might be underrated is that he also appears in two other major films this year - Mad Max: Fury Road and The Revenant.

An irony is that Tom Hardy is not a household name, although he has starred in several memorable movies. Hardy was in fellow countryman Christopher Nolan's Inception (2008). He reunited with Nolan and played the villain Bane in The Dark Knight Rises (2012).

Last year Hardy gave a tour de force performance as the sole actor driving a car throughout Locke (2014). He at least won recognition from the LA Film Critics Society when he won Best Actor.

In The Drop (2014), with James Gandolfini, he deftly underplayed a quiet but deceptive bartender in Brooklyn.

Hardy is set to reprise the role of Max Rockatansky in Mad Max: The Wasteland.

Another impediment to recognition of Hardy in Legend is that it is directed by first-timer Brian Helgeland. Hardy transcends the potential pitfalls of a novice director. But Helgeland, who wrote the screenplays for LA Confidential (1997) and Mystic River (2003), creates a screenplay that Hardy can devour.

Legend is the tale of two actual twin brothers who became notorious gangsters in London in the 1960s. Ron Kray is a "paranoid schizophrenic." He is aggressive and brutal, but he's no oaf. He's ebullient, violent, impulsive, and outrageous. But he can have tender moments and has surprising knowledge. He's also bespectacled and homosexual.

Ronnie listens to a Churchill speech, loves westerns, refers to Agamemnon and Utopia. And he speaks softly to his brother's wife Frances (Emily Browning) when she is in distress.

He has fists of iron and a brain of mercury. Basically, he's a killer.

Reggie is cooler. He's the anchor. He's dapper, reasonable, and socially adept. He can be romantic, such as when he gives flowers to Frances when he is trying to woo her. He is loyal to Ron, "He's my brother." And, "he has a heart of gold." Also, Reggie's a killer.

Several reviewers want writer/director Helgeland to be Marty Scorsese. He knows his Scorsese, but creates a different tone. There's an undercurrent of humor. The garbled language enhances the uncertainty. And so does the piquant absurdity.

It may have something to do with the exotic tea that Violet Kray (Jane Wood) raised her two sons on. Such is the drink of gangsters.

Tom Hardy can be exotic and simple. From Mad Max to Ivan Locke to the Krays, the man has such range.

It may not win many awards, but it is precious.