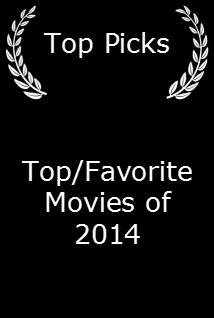 For much of 2014, it appeared as though it was going to be a forgettable year at the movies. But in November and December, the film vaults opened, and quality sprang out.

The year is ending with a barrage of powerful films. They are challenging, so the viewer has to try to get on their wavelength.

Good films often challenge our sensibilities and preconceptions. We have to invest and participate in them - personally. It's not always easy.

The following is a list of the films that rewarded me with their style and truth, even though sometimes they were arcane. But for me they prevailed.

One of the major tenets of Clint Eastwood's ebullient career is his commitment to surprising us. He continually pursued unexpected projects - from female boxing to the Japanese wartime point of view. If you were to guess who was going to direct The Bridges of Madison County (1995) or Jersey Boys (2014), Eastwood would be near the bottom of the list.

In 2014 he accomplished one of his best surprises. After years in which he seemed to have lost his touch and even his spirit, Eastwood came roaring back.

Eastwood can make films that appeal both to conservatives and liberals. That's a rare ability. American Sniper is one of those films.

This is a film bristling with energy. The last scene explodes with impact that blows us right out of the theater.

J.K. Simmons is the odds-on favorite to win the Oscar for Best Supporting Actor for his fierce performance as the abusive instructor who demands unquestioning obedience to his often mean-spirited behavior. Miles Teller, portraying the student drummer, is an apt foil for Simmons. They create a frazzled, memorable bond.

Director/writer Damien Chazelle draws on his own experience to make powerful, reverberating music.

This under-appreciated film has one of the best leading performances of the year. Jeremy Renner captures the humanity and battered honor of actual journalist Gary Webb. Webb, an investigative reporter for the San Jose Mercury News, uncovers a conspiracy in which the U.S. government worked with drug dealers to import cocaine to U.S. cities to make money to support a clandestine operation in Nicaragua.

But then Webb is betrayed by his paper and other journalists, who set out to destroy him and his story.

This may be the most powerful film of the year. It too is relevant today. It brings back history with substance and anguish. Glory and horror.

It focuses on 1965 and Martin Luther King, Jr.'s quest for voting rights for Negroes in the South. It is a task faced with brutality, uncertainty, and agony.

This is a tours de force. It's a film that should never work, but does. Remarkably well.

Limited to inside of a car, moving on a highway at night with other vehicles hurtling by, it can't succeed. But it's a film dizzy on cinematic terms.

Tom Hardy plays the driver, who's going from Birmingham to London in his BMW in a trek of honor. He's going to support a woman giving birth whom he has promised to join for the birth. He has to deal on the hands-free phone with a lot of problems. He's a construction foreman for a huge concrete pour scheduled the next day. And he has a family at home.

It sounds like more of a sobbing pour than a concrete pour.

But, written and directed by Steven Knight, it's a film as film on occasion can be - a rare, risky achievement.

This is a film that general audiences probably should avoid. It's a time bomb - on a long, slow fuse.

Director Bennett Miller, with writers E. Max Frye and Dan Futterman, has created a chilly indictment of the effects of money and ego on the American Dream.

Another film, based on actual events, Foxcatcher probes the relationship between brothers Mark (Channing Tatum) and Dave Schultz (Mark Ruffalo) and the millionaire "mentor" John E. du Pont (Steve Carell) who insinuates himself into their lives.

The brothers had each won an Olympic Gold Medal in wrestling, and du Pont lusts after Gold.

There is more universality in Foxcatcher than first may meet the eye.

It's a grim elegy for the American Dream.

7.) Guardians of the Galaxy

After the pain and angst, it's time to soar with the heroes.

The most memorably incorrigible character in movies this year is Rocket Raccoon (deceptively voiced by Bradley Cooper). He's a keeper.

I haven't completely forgiven director James Gunn for the mispronunciation of The Maltese Falcon, but Rocket Raccoon keeps hitting me on the side of the head.

Guardians of the Galaxy was a gluttonous feast of special effects.

This is a gem of an indie film. Written and directed by Mark Raso, it starts slowly, but becomes a humanistic personal journey to Copenhagen. New Yorker's eyes (actually Canadien) see a foreign wonderland.

Raso is fortunate in his gifted actors Gethin Anthony and Frederikke Dahl Hansen; they bring evocative life to the film.

Director Roman Polanski is still making unique, personal movies. Adapted from the play by David Ives based on a novella by Leopold von Sacher-Masoch, Venus in Fur offers Polanski an opportunity to cast his wife of 25 years (Emmanuelle Seigner).

The play has only two characters. Thomas is played by Mathieu Amalric, who has a striking resemblance to a younger Polanski. Amalric portrays a stage director, who meets an actress (Seigner) who arrives late out of the rain for an audition in a Paris theater.

As the two meet in conflict and pretense, roles shift, words change. And domination is up for grabs.

It's a literate, stylish battle. It should be titled, Irony in Fur.

10a.) The Two Faces of January

Every year Alfred Hitchcock's influence is still apparent. In The Two Faces of January, director/screenwriter Hassein Amini made a film based on a novel by Patricia Highsmith. Hitch did a film from another Highsmith novel, Strangers on a Train (1951).

Hitch was a sucker for dualities; so is Amini.

Viggo Mortensen, Kirsten Dunst and Oscar Isaac (who also was excellent in 2014 in A Most Violent Year) meet with verve and style.

Set in 1962 in Athens, Greece, The Two Faces of January brings the deceptive trio together as a tour guide (Isaac) takes a married couple on an enigmatic Hitchcockian journey.

10b.) Magic in the Moonlight

It's unlikely that this film is on anybody else's best ten list, but it's an escapist delight. One of the abiding traditions of movies has been escapism.

Magic in the Moonlight is the film I could recommend most in 2014 to different people, no matter what their values or background.

Magic in the Moonlight is fun at the movies. That's a reviewer's boon.