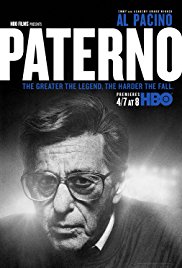 What makes the movie Paterno most effective is that it is directed by a canny pro.

The HBO feature is helmed by Barry Levinson, who directed such major films as Good Morning, Vietnam (1987), and won an Oscar for Rain Man (1988)

It has been quite a while since Levinson did a memorable film - perhaps Wag the Dog (1997) was his last, but Paterno is in his wheelhouse. The Baltimore-born director brings an eastern sensibility. He knows his sports, and the shattering of icons. Levinson directed The Natural (1984).

With a smart screenplay by Debora Cain and John C. Richards, and a tours de force performance by Al Pacino as Penn State football coach Joe Paterno, Levinson is at the top of his game.

While most directors and writers might have exploited the story, Levinson and his crew don't exploit the sensational material. This may be a negative for audiences in the in-your-face, blatant 2018 arena. But Levinson's cool tone is in stellar service of his story.

Levinson captures a man caught between pathos and tragedy. He shows the effects in a brilliantly editing episode in his bathroom, when Paterno is listening to the Penn State-Nebraska game, and he reels about queasy and untethered. This captures a wounded man in free fall.

In a scene at the end that reveals more shocking information, Levinson wisely brings back the focus of his film. The focus is back on the victims.

Paterno is the tale of the aftermath of the expose of Jerry Sandusky's pedophilia. Sandusky had been Paterno's friend and assistant coach at Penn State for decades, and Paterno had avoided - both wittingly and unwittingly - the vile behavior of his colleague.

Joe had lived through a different time, before the scandals about priests broke into the mainstream. How accountable was coach Paterno and his immediate superiors, including the President of the university?

As in the Oscar-winning Spotlight (2015), the media exposes scandal and its cover-ups. Reporter Sara Ganim (Riley Keough), a Penn State graduate, who works for the Patriot-News, in the area of Harrisburg, Pennsylvania, is committed to the story of Sandusky and his young victims.

Her persistence brings about obfuscation and tumult. But eventually facts break through and have validity. They matter. What a concept. Fake news becomes truth. It was all the time.

Riley Keough, who is the daughter of Lisa Marie Presley, is convincing as the young reporter.

Al Pacino is striking as JoePa. He shows him becoming distracted, detached, trying to stay oblivious. Joe tries to keep the tunnel vision of a coaching legend. He is all about the job. The upcoming game against Nebraska is everything.

Paterno rings with relevance today. It's about institutional self-preservation, lack of ethics, dismissal of facts, and lack of accountability.

It has lines that seem contemporary. Joe Paterno's son says, "It's a witch hunt."

And Joe himself says about Jerry Sandusky, "He's a good man."

After 45 years, Joe is fired in a phone call. What, Twitter wasn't available?

It used to be that the sports teams were supplemental to the universities. Today they are in charge.

Most fans seem to think athletes should be paid. But they do get educations. They get what? Forget education - give them the money, so they can move on to the real world, where for many education just gets in the way.

But in Paterno he shows that he cares about knowledge.

The coach's name was on statue and trophy, but they were made of clay.