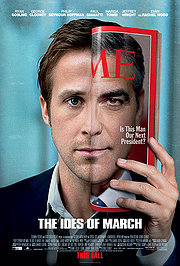 The Ides of March is like the Obama administration -- it doesn't deliver.

Movies about politics should have power and, perhaps, even sting. When they're diluted, because of attempts to reach the mainstream, they often lose their bearings and waste their potential.

The idea that politics corrupt idealism is so well-worn and obvious that it's dated. Bring something new or at least give us characters of substance.

The Ides of March is about a party primary in Ohio. Mike Morris (George Clooney), the governor of Pennsylvania, is in a close race for Ohio's Democratic party's votes to be nominated for president.

His communications mastermind Steve Meyers (Ryan Gosling) is an idealist. Trust us, he's a mastermind and an idealist, although there's little evidence of either. When a crisis comes up, the campaign has to manage it, and Meyers, et al. are challenged.

Clooney as filmmaker has become more manager than artist.

The lack of backstory leaves the characters one-dimensional. When the film begins, there's a shot of Meyers in profile. Little did I know I was going to get half a character. [The other profile appears at the end.]

Well-fed reviewers may promote The Ides of March as an Oscar contender. Gosling could be nominated for playing Cipher of the Year.

Stephen Meyers has no backstory. None of the characters do, except Paul Zara (Philip Seymour Hoffman) who has a little. He tells a story about his past that promotes the concept of loyalty.

Despite the charm of Clooney, the drive of Ryan Gosling, the vulnerability of Evan Rachel Wood, and creative character actors such as Hoffman and Paul Giamatti, The Ides of March is thin and sketchy.

The characters of the women are even more slight than the men. They're either Bearcats (UC) or Buckeyes (OSU). That's about it.

And Mike Morris' wife (the usually talented Jennifer Ehle) is given one frozen expression -- look adoringly at her husband.

Her husband is an amalgam of Scooby-Doo and John Edwards.

It's surprising that The Ides of March, which is "based on" the play Farragut North by Beau Willimon, is so undramatic.

Where's Gore Vidal when we need him?

Screenplay writers Clooney and Grant Heslov need a little of Vidal's withering wit. Vidal wrote a political play that was made into an effective movie The Best Man (1964) with Henry Fonda.

Vidal also appeared as actor in the role of the liberal incumbent in Tim Robbins' underrated political film Bob Roberts (1992).

Vidal and Norman Mailer used to create sparks in their tv appearances. In 2011 Clooney and Charlie Rose create spin.

The Ides of March has none of the edge and wit of Bob Roberts or The Candidate (1972).

The champion of political angst is Michael Richie's terrific The Candidate.

Principle is the Father of Irony. Most political films are steeped in irony -- both Bob Roberts and The Candidate are. So are All the President's Men (1976), Wag the Dog (1997), and even John Ford's The Last Hurrah (1958).

But irony is not a concept for 2011, so The Ides of March at best soft-pedals it.

TV's Jon Stewart and Stephen Colbert may be among the last effective purveyors of irony in contemporary culture.

And we've seen Joe Lieberman taking the credit for gay rights. I don't think those who voted for Obama thought Lieberman was going to be the face of the party. Actually, although an "independent," Lieberman is the two faces of the party.

Isn't it time for a political movie that hits hard and sticks to its principles? Is there a Ron Paul of directors out there?

I wouldn't vote for him, but I'd really respect him.