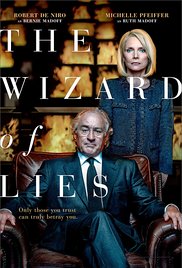 Content by Tony Macklin. Originally published on May 23, 2017 @ tonymacklin.net.

The 133-minute feature The Wizard of Lies (on HBO) is director Levinson's semi-triumphant return.

It's been 20 years since Levinson directed a memorable movie - Wag the Dog (1997). He has a stellar directorial past. Levinson won an Oscar for directing Rain Man (1988). Levinson's Disclosure (1994), Bugsy (1991), and Good Morning, Vietnam (1987) all were intelligent films about image, reality, deception, and the breaking of the rules.

Now Levinson brings his sensibility and deft touch to Bernie Madoff (Robert De Niro). He reveals the man - who plays with lives and mortal destinies - behind the curtain. Levinson is Toto.

Levinson is served beautifully by his cast - he's always been an actors' director. De Niro gives a performance of heft and perception. The rest make a worthy ensemble.

Much of the cast doesn't share Madoff's ethnicity, but the director does.

De Niro reminds us of what he can be when he is committed intensely to a character. It's been a while.

Michelle Pfeiffer is persuasive as Bernie's loyal wife who is far beyond her shallow depths. Alessandro Nivola and Nathan Darrow are convincing as the ill-fated sons. Their downfall is haunting.

Levinson is generally unevenly-served by his writers. A trio of screenwriters - Sam Levinson, John Burnham Schwartz, and Samuel Baum - adapt a nonfiction book by NY Times journalist Diana Henrique. Henrique plays herself in the film. She portrays the journalist who interviews Madoff in prison. This may be one time where actuality weakens the effect.

Early in the film, Henrique in a voice-over, says about interviewing Bernie, "... in our conversation he seemed relaxed - unfailingly candid, earnest, and trustworthy. That is his talent and his curse."

This is a 2-sentence comment that should be cut. Henrique has said she tried to be cordial when she began the interview. Cordiality to Bernie, and cordiality when she's portraying him to the audience are very different. This voiceover creates a tone complimentary to Madoff. It doesn't belong. Let the viewer decide for himself or herself. That's what the film is for.

The first time I saw The Wizard of Lies, I turned it on 20 minutes into the film, and it's a stronger film than the entirety. The beginning portion, although informative, is more explicit and ordinary than what is to follow.

The Wizard of Lies is at its best when it convinces us that his sons had no direct knowledge of their father's Ponzi scheme. Their devastation is palpable.

In some ways, The Wizard of Lies is an American tragedy. But Bernie Madoff is no King Lear - he is too superficial for that. He's more the King of Compartmentalization. He is able to shut off empathy and ethics. He keeps his corruption in one compartment. His family in another.

Fate rules the life of Madoff. When investigators from the SEC have him in a trap, they never follow up. Madoff escapes unscathed, to do more damage.

Bernie is no tragic hero, but his effect on his family (Willie Loman also had two sons), and his kingdom is dire.

Ironically, in The Wizard of Lies, Barry Levinson and Robert De Niro are at the top of their game. Somehow they transcend the muck of Madoff.