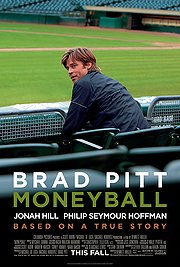 Moneyball is an impelling triple. It's smart, agile, and effective.

But it's anti-climactic, as though the runner is stranded on third base.

Moneyball is the story of Billy Beane (Brad Pitt), the general manager of the Oakland Athletics, who as the 2001 season ended had the stars of his team taken by big market teams who could spend more.

Using the acumen of Peter Brand (Jonah Hill) young Ivy League grad of economics who was employed by the Cleveland Indians, Beane was influenced to use stats to uncover new ways to win, e.g., bases on balls were as good as hits.

Bill James, the guru of stats, had begun to offer a new way of looking at baseball. Beane and Brand put it into practice on the field.

For a yield of dreams, it transformed the Athletics for a while, and influenced baseball.

But, as nice as dreams are, baseball still is a game of money. The Phillies bought their divisional championship this year by paying Roy Halladay, Cliff Lee, and Roy Oswald financial windfalls. They're moneyarms.

Moneyball is how Beane attempted to lowball the opposition, and the surprising results that it had.

True sports fans love the game, whatever their sport may be. But today we live in a world in which money and shtik rule. The stands are full of waves, rally monkeys, and the mass waving of white towels. It dumbs down the game.

In politics we'd like the underfunded candidate to win against the corporate-backed one, but he never does. Can Elizabeth Warren win in Massachusetts? Money speaks. They bought Johnny Damon. Until the Yankees bought him.

Early in the movie Beane talks to "Scott," obviously Scott Boras, Johnny Damon's agent, who of course breaks his word. Is there a movie in the works about Boras called, Moneygrubber?

True fans want their team to win -- sometimes desperately -- but they love the game more.

In Moneyball Beane has the line, "How can you not be romantic about baseball?" And much of Moneyball captures the joy of the game.

But Billy -- who should know better -- ultimately seems only concerned with winning. He mutters that if you don't win, "It means nothing." It's a line for 2011.

But the game does matter. It's a hoary statement that, "It's not whether you win or lose, it's how you play the game." But it's true for some of us.

The Oakland A's had a miraculous string of consecutive wins. Beane was there when baseball had its Eden. "It doesn't matter."

I don't believe his callous disregard for what he accomplished. As player Scott Hatteberg (Chris Pratt) calls one game, it's "magic."

Writers Aaron Sorkin and Steve Zaillian -- adapting Michael Lewis' book Moneyball: the Art of Winning an Unfair Game -- render an unfair climax to the movie. There are several scenes -- a Hatteberg play or wonderful footage of a minor league player's faux pas that would have ended the movie with a bang instead of a whimper.

In an earlier scene Billy Beane's daughter Casey (Kerris Dorsey) strums a guitar and sings a song -- The Show, originally done by Lenka -- for her father. It's one of several tender moments in the movie. Director Bennett Miller skillfully creates these scenes.

At the end of the movie she sings a version of the song with changes she has concocted. I assume it's teasing, but there was no hint of teasing previously. Casey always was worried and totally supportive. The song rings false.

Brad Pitt is terrific as Beane. Several reviewers have commented on Pitt's similarity to Robert Redford. He even has a mole on his cheek. Pitt surely studied RR when Redford directed him in A River Runs Through It (1992).

When Redford was the same age as Pitt is now, he played Roy Hobbs in The Natural (1984).

Jonah Hill's role has been twisted. He portrays the man who became Beane's assistant. The actual person was Paul DePodesta, but DePodesta didn't like the way he was being portrayed, so they changed his name to Peter Brand.

In 2004 DePodesta went on to become the GM of the Los Angeles Dodgers, but was fired a year and a half later after the 2005 Dodgers finished with their worst record in more than a decade.

These days DePodesta is vice president for player development for the NY Mets. How is that working out for you, Paul?

Director Bennett Miller and writers Sorkin and Zaillian could swing for a home run.

But in Moneyball, they settle for a base on balls.