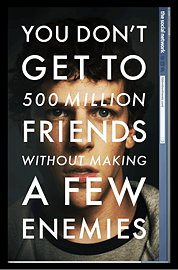 Most information today comes to us with absolutely no concern for the sloppy, lazy language in which it is expressed.

We live in a world of "you know," "I mean," and "I'll tell you what." Listen to any interview on ESPN. Or any sports' program. Or most conversations.

Our public discourse is a Babel of banality.

Facebook certainly is not called Brainbook. I'll show my face if you show me yours. At least one of my faces. And I'll show me with the faces of my friends. We go face deep.

Our brains have become our spleens. Our fingers speak abbreviated nonsense.

I'm not criticizing Facebook any more than the telephone. My problem is the people using it. Our private discourse is myopically egocentric. It's "elitist" to try to think. When's the last time you heard anything that even slightly suggested humility? Today humility is a dodo.

Into this fallow environment come a daring duo -- director David Fincher and a screenwriter Aaron Sorkin who love language and are committed stylists. Their collaboration in The Social Network is something to see -- and hear.

Fincher is a perfectionist -- he supposedly did the opening scene of a conversation 99 different times. Talk about inflection. And Sorkin loves the way words sound and wit vibrates.

The Social Network may bore into its subject, rather than blow it up, but it has inviting style and depth. It's an adroit portrait of a revolutionary time that emboldened contact at the same time that it made it less meaningful. It's about the dawning of Facebook and the fallible human being that spawned it.

In the opening scene of The Social Network, Mark Zuckerberg (Jesse Eisenberg) is in a Cambridge tavern pontificating to a girl Erica (Rooney Mara). She has become tired of his self-indulgent insensitivity. She says, "Dating you is like dating a StairMaster." And she ends the wearying exercise.

Frustrated and under the influence of alcohol, Mark goes back to his room and attacks Erica on his blog -- even her bra cup size. He's no gentleman. Good manners never are a factor in his life.

He then decides to create a website on which Harvard users can rate Harvard girls. It quickly gets 22,000 hits, which draws the attention of a privileged trio in one of the seven houses at Harvard, and they invite Mark to create a social network they've been planning. Though he's forbidden to go beyond the bicycle room in their house, Mark agrees.

But while they are waiting, with the financial backing of his roommate Eduardo Saverin (Andrew Garfield), Mark creates his own website -- The Facebook.

To the dismay of the original trio, the website takes off and becomes established at other universities. Their elitist idea is going wide.

Much of The Social Network is set at two depositions of those who are suing Mark. One deposition is with Cameron and Tyler Winklevoss, who say Zuckerberg stole their idea, and the other is with Eduardo who was shoved aside as his partnership was usurped by big business.

One of the difficulties of The Social Network is our rooting interest. For whom do we root? Probably not Mark Zuckerberg.

Fincher has related his film to Citizen Kane (1941). Aim high, Davy. But Mark Zuckerberg is more like Citizen Schmuck.

Granted both Kane and Zuckerberg gauchely seek acceptance and admiration. And like Kane, Mark is loveless.

But while Kane was nouveau riche, Zuck is petulant, cocky and yet insecure, and totally lacking in social graces. Zuckerberg is not gregarious and outgoing like Charles Foster. He lacks the vitality of Kane.

If there's anyone for whom we root, it may be Eduardo who is a victim of greed and manipulation.

The cast is very able. Eisenberg makes a credible Zuckerberg, and Andrew Garfield is appealing as his Brazil-born roommate. Rooney Mara -- who has the role of Lisbeth Salander in Fincher's remake of The Girl with the Dragon Tattoo (2010) -- has verve as Erica.

Justin Timberlake brings dimension to the role of the callow co-founder of Napster Sean Parker, who is a master manipulator and exploiter. Parker is more Kane than Zuckerberg is. Both Parker and Kane changed the American Dream into the American Success Story.

Sorkin based his screenplay on a book by Ben Mezrich, but the dialogue is basic Sorkin. The screenplay has to be the favorite for the Academy Award for Best Screenplay.

Fincher and Sorkin like absurdity -- e.g., Caribbean Night at a Jewish fraternity with a picture of Niagara Falls on a screen. Or satiric details such as a banner endorsing Polaroid on the side of a scull in a Henley Regatta in England.

They include a tours de force scene when the twins encounter President of Harvard Larry Summers (conservative Douglas Urbanski) in his office, and he scoffs at their appeal to simple ethics. Summers later became Obama's head of the National Economic Council.

One of the most intriguing elements in The Social Network is Fincher's use of dualities and dopplegangers.

In a brilliant bit of "casting," Fincher has two bodies and one face portraying the Winklevoss twins -- Cameron and Tyler. Two actors -- Armie Hammer and Josh Pence -- provide the bodies, but only Hammer's face is used. Nothing two-faced about this Facebook.

The two Winklevosses make an intriguing doppleganger. Cameron wants to live by the traditional view of ethics at Harvard, but his twin dismisses it and wants to fight Zuckerberg. Two contrasting attitudes.

It's one of a series of enticing dualities. The piquant dualities are an element that almost demands that astute viewers see The Social Network more than once.

Some of the arresting pairs: Zuckerberg and Eduardo, two girls at a party involved in sexual activity, two bathroom stalls in each of which a guy and an Asian girl have sex, two revolutionary websites -- Napster and Facebook, two Zuckerberg websites -- Facemash and Facebook, pairs of Harvard girls on screen to be rated. The Social Network is a movie about "winners" and "losers."

Some other dualities are the two depositions, two locales -- Massachusetts and California, two young men going off a roof into a swimming pool in California (one damaging a chimney), two couples taking cocaine at a party, two contracts for Eduardo, two bottles of beer Mark tosses to a girl -- both fall and shatter -- which shows Mark's unawareness of what happens with other people.

The Social Network is brimming with such dualities -- good and bad, positive and negative, successful and failing.

The Social Network offers both "friends" and friendship. In 2010 language is under assault. It's hard to resist indifference.