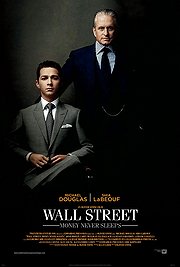 Director Oliver Stone based some of his film Nixon (1995) -- an underrated movie -- on Orson Welles's Citizen Kane (1941). It added to the vision and scope.

With Wall Street: Money Never Sleeps, Stone may be following in the footfalls of another Welles's classic -- The Magnificent Ambersons (1942).

After completing his version of Ambersons, Welles went to South America. The studio changed his ending and added a phony, upbeat conclusion, which botched the movie.

After seeing Wall Street: Money Never Sleeps, my question is -- Did Oliver Stone go to South America? Somebody surely botched his ending.

The movie opens in 2001 with Gekko being released from prison, then leaps to 2008 when Wall Street shook and plummeted.

Jake is a hot trader on Wall Street, who is idealistic about alternative energy. Touch all the bases, Ollie. Jake is living with Gekko's daughter. But his life is shaken when his mentor Louis Zabel (Frank Langella) is victimized and destroyed by Wall Street shark Bretton James (Josh Brolin).

Jake wants revenge, Gekko wants to get back in the game, Bretton wants "more," and Winnie wants peace. But they all live in a system that espouses greed and "moral Hazard" -- taking money with no responsibility.

It seems an ideal setting and target for Stone. But is Stone now like the Democratic Party -- avoiding tough choices and settling for bland, meaningless stasis? At movie's end, it seems so.

Has another liberal lion turned into a capitalistic tabby? Since Nixon and W. (2008) weren't blockbusters, Stone obviously yearns to make movies that are more commercial. In both World Trade Center (2006) and the Son of Wall Street, Stone pulls his punches.

The writing (by Allan Loeb and Stephen Schiff) in Wall Street: Money Never Sleeps at times is better than average, but the movie's strength is its acting. Stone doesn't get enough credit for the acting in his movies.

Michael Douglas is a smouldering cauldron of personality reprising the role of Gekko. His scene with Winnie, sitting together on steps, is especially emotionally affecting.

Shia LaBeouf is appealing and substantial as the thoughtful trader. [He even looks a bit like Tim Holt in Ambersons.] Carrie Mulligan is apt at walking away, which seems the essence of her character. Maybe she's representative of Stone.

Josh Brolin -- a fine actor -- should have been given a more defined role. His comeuppance seems almost an afterthought.

The best role in the movie is Jake's mentor, and Frank Langella is wonderfully potent as the wounded Wall Street animal.

The rest of the cast is a clever and provocative grouping. Susan Sarandon plays Jake's mother who is caught in the contemporary quicksand of real estate, 95-year old Eli Wallach is an ancient mogul, Austin Pendleton is an idealistic scientist, Sylvia Miles -- off the streets of Midnight Cowboy (1969) -- is a realtor, and John Buffalo Mailer, Norman's son, adds to the notoriety.

Stone's direction is combustible -- a mix of video game and even an iris. He mixes the dying present with the living past. He's also indulgent, such as when he brings Charile Sheen back in an ill-advised cameo. Decent Bud Fox is now indecent. It's lazy writing. Unearned.

In some ways Wall Street: Money Never Sleeps is a modern western. The Good, the Bad, and the Ugly on Wall Street.

Gekko is the aging outlaw. Jake is the young gun. Bretton is the all-powerful rancher, who's stolen others' lands. Zabel is the old sheriff. And Winnie is the flighty schoolmarm.

Eli Wallach played the Ugly in Sergio Leone's The Good, the Bad, and the Ugly (1967). One of the cell phones in Stone's movie has a ringtone from that Clint Eastwood classic. Jake and Bretton ride on motorcycles instead of horses.

But in Wall Street: Money Never Sleeps, the only thing left hanging is the plot.

Ollie, did you ride off to South America?