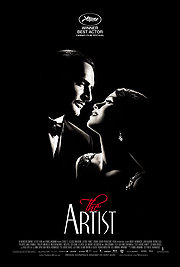 The Artist shouldn't work, but it does. Beautifully.

It's in black and white (and shades of gray), and is silent except for music and a few incongruous sounds. It's about making movies in the late 1920s and early 1930s. Well, that's faded celluloid.

But have no fear that the past is moribund.

The Artist is vibrant. It is clever and dramatic, and has a rich treasure trove of cinema lore and vitality.

The Artist's director/writer Michel Hazanavicius -- a gifted, knowledgeable Frenchman -- is a stylist with ingenuity and aplomb.

The Artist is the oft-told story of a star of silent films passing into near-anonymity and depression as sound comes in. Nothing fresh there.

At the height of his success happy-go-lucky, gay blade George Valentin (Jean Dujardin) meets a fan Peppy Miller (Berenice Bejo), who becomes an extra and then an ascending actress who attains stardom. George and Peppy become friends who pass each other in the dawn of sound.

Is this going to be another A Star is Born? No, although The Artist does have some reverberations from that classic.

George goes through all the standard behavior of a man who has lost his career -- divorce, alcohol, loss of finances, stubborn pride, and dissolution. Can love save him? Again, nothing fresh.

The plot is so standard that it seems it might expire from exhaustion. But filmmaker Hazanavicius dances off that well-worn road. He has a wonderfully playful sense of style and surprise.

Hazanavicius uses title cards to his advantage, re. the startling and surprising "Bang!"

Like Woody Allen and Marty Scorsese this year, Hazanavicius is a masterly cineaste, and The Artist is bursting with references and allusions.

My favorite is Hazanavicius' use of Bernard Herrmann's haunting love theme from Hitchcock's Vertigo. (All but one of the reviewers with whom I saw the film were oblivious to where it came from. Sigh.) It provides power as the film evolves toward its conclusion.

Other allusions are that Valentin seems to be a mixture of Douglas Fairbanks and Gene Kelly. And we probably should note that Valentin only lacks an o.

In a couple of shots Dujardin looks like Kelly. And, of course, there's rain. Other connections to the past are the table sequence and the shrouded possessions in Citizen Kane.

And we are reminded of Fred and Ginger.

Like Cinema Paradiso (1988), The Artist renders love of movies personal and timeless.

Hazanavicius clings as lovingly to past film as George does to the can of precious outtakes.

The Artist captures the eternal wonder of movies -- new and old.