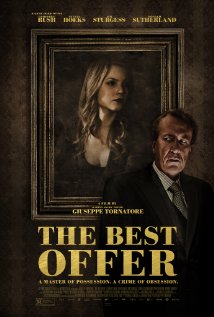 In The Best Offer, director/writer Giuseppe Tornatore feasts at the Hitchcock table.

The Best Offer is the story of Virgil Oldman (Geoffrey Rush), who is a very successful auctioneer of valuable art works. Oldman (an obvious surname) is urbane, forceful, and dour. He's also virginal and isolated. He eats alone.

His relationships are limited and professional. He unethically rigs some bidding with his plant Billy (Donald Sutherland). He has another ally in Robert (Jim Sturgess), who restores objets d'art and machinery. But he doesn't even know his long-time aide has been married for 30 years. He has little for engagement with other people.

But in his vast, posh home he has a multitude of artistic portraits of women on the wall of a secret room. They are inanimate objects, but he has "loved" them all.

Into his rigidly ordered life comes the voice of a young woman, Claire Ibbetson (Sylvia Hoeks). She calls him on a landline phone in his office - he has no cell phone. He's a man of tradition. Claire wants Virgil to evaluate the art in her villa. She tells him that her parents died in a car crash and she wants to sell some of the artworks.

At first, Virgil is dismissive, but eventually he agrees to visit the villa. She doesn't keep the appointment. But Virgil becomes infatuated by the art in the villa and the mysterious young woman, although she is more than three decades younger than he is.

Claire speaks to him from behind a wall - she is a victim of agoraphobia. She says, "I haven't left my house since I was fifteen." He can't see her, although she can view him through a peephole in the wing of a small painted bird on the wall. He hides and witnesses her when she comes out from behind her wall after he supposedly has left. Finally he admits that he has been in the house, and begins to try to build her confidence.

Robert tells Virgil that if he wants to woo her, he must continue to surprise her.

The audience knows that the relationship probably is doomed, but we don't know what is going to happen next. There is both an inevitability and an unpredictability. Hitch would be proud.

Hitchcock's themes of voyeurism, alienation, and anxiety are rampant in The Best Offer.

The Best Offer is a work of of stylistic mastery. It has provocative layers. Cinematographer Fabio Zimarion, production designer Maurizio Sabatini, and set designer Raffaella Giovannetti create a look of opulence, sometimes dusty and always evocative.

Since Valentine's Day is approaching it might be timely to remember the romantic spell that director Tornatore and composer Ennio Morricone created in Cinema Paradiso (1988). The montage of classic movie kisses is replaced in The Best Offer by lovely pans of portraits of women on the wall. Tornatore and Morricone are wending their magic again.

This time Morricone also references Bernard Herrmann's stunning sound in Vertigo. His score is haunting, subtle, and wistful, and at times sudden and bold. Strings sob softly. In March 85-year old Morricone is going to appear leading an orchestra in the US, once in Los Angeles and once in New York. The soul of movie Paradiso is here.

The Best Offer abounds with trinities. Bids in the auction can be made by people present, over the web, or by phone. Virgil orders tea three time in a tavern, but only drinks the last. When Virgil asks about the automaton he's trying to assemble, Robert says, "Three pieces of mosaic are not enough." Relationships break into trios.

The cast in The Best Offer is relatively convincing. Like Scottie in Vertigo, Virgil is wandering. Geoffrey Rush is a credible wanderer. Sturgess and Sutherland are able as the allies. Hoeks lacks age and presence. Hoeks is no Kim Novak, but then who is?

The best performer in The Best Offer is the style. As in Hitch, style dominates.

The Best Offer ends with a Hitchcockian tracking shot. The final shot leaves us with the same palpable angst that Vertigo does.

In The Best Offer, Virgil says, "There's always something authentic concealed in every forgery."

In Tornatore's artful forgery, it's the authentic Hitchcock.