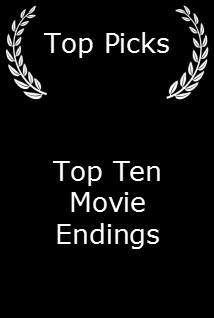 Recently boxing-guru Al Bernstein participated in a 48-hour radio fund raiser for The Caring Place -- "a facility for those touched by cancer." He asked me to come on and talk about my favorite movie endings.

Today endings often don't resolve anything. A prime recent example is Pirates of the Caribbean: Dead Man's Chest, which at the end perfunctorily introduces Barbossa (Geoffrey Rush) from the first Pirates film and seems totally aimed at setting up the next sequel. It's really a cheat, but by that time -- 2 1/2 hours -- the audience is sated and ready to walk any plank out of the theater.

The best directors often have trouble with endings; Martin Scorsese and Ron Howard are two that sometimes fade at the end. Scorsese, playing the part of director Joe Lesser in Irwin Winkler's Guilty of Suspicion (1991), pokes fun at his own inability to end a movie. Howard's endings often seem afterthoughts -- never as effective as the movies that precede them. A Beautiful Mind (2001) won the Academy Award as Best Picture of the Year, but its ending -- with an audience applauding John Nash at the Nobel ceremonies -- is perfunctory and generic.

A few rare endings are so sly that no one remembers them. If you ever want to win a bet, ask someone -- even if that person has just seen the film -- what the final words are in The Silence of the Lambs (1991). Even the usually-omniscient Tim Dirks on his website The Greatest Films fails to include them in his description of the ending.

People always think the final words are from Hannibal Lector when over the phone he tells Clarice that he is "having a friend for dinner." But that's not the ending. Director Jonathan Demme and writer Ted Tally keep the movie going. Hannibal's fatuous adversary Dr. Frederick Chilton deplanes in a Third World country and asks a man if the security is set up and the man replies in the affimative. Then we see Lector walking among the people. We're exporting paranoia and serial killing.

The best endings are the ones that have impact and are essential to their films' visions. The following are ten endings that leave their movies reverberating with meaning:

Some other films with special endings:

The Third Man, Citizen Kane, Casablanca, The Graduate, Alien, Five Easy Pieces, The Candidate, The Circus, The Long Goodbye, The Maltese Falcon, Jules and Jim, Psycho, The Birds, Carrie, Manhunter, The Wild Bunch, Once Upon a Time in the West, The Shawshank Redemption, Fight Club, The Usual Suspects.