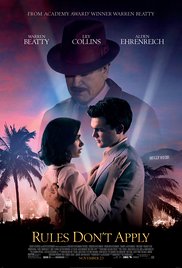 Rules Don't Apply is a hash from the past.

Rules Don't Apply is a film by an American auteur (author) Warren Beatty. He directed, wrote the screenplay (Bo Goldman co-wrote the story), acted in, and produced the film. That near-total control makes it a personal film for Beatty.

Warren Beatty once told me, "I just don't get interested in subjects that aren't important to me." He said he rejected an offer to be in The Godfather (although supposedly he did do a screen test). "What do I bring to that?"

One can imagine the themes in Rules Don't Apply are important to Warren, but it's a challenge to discover his values in the film. Many reverberate beneath the surface.

Beatty gives a vivid tour de force performance as eccentric billionaire Howard Hughes. His Hughes is a little bit crazy. He is bombastic, callow, and driven to wild extremes, but he also has moments of quiet rationality and clarity.

How much should we associate Warren Beatty to Howard Hughes? Obviously, he is far from crazy, but he too has been represented as a figure of fantasy. How much does Warren see himself in Howard, and how much do their worlds intersect?

Rules Don't Apply begins in 1964 in Hollywood with a large group of media awaiting a phone call from Howard Hughes (Warren Beatty), in which he is supposed to prove his competence. In the recent past, an interviewer has said that he met with Hughes and declares him to be suffering from dementia. They are awaiting the "reality" on a phone call.

This concept obviously appeals to Beatty. He has said none of the books about him tell the truth. Like Hughes, Beatty's image has transcended his reality. He is an enigmatic figure despite his availability. Over the years the media has created Beattystein.

With the media awaiting the phone call, Rules Don't Apply leaps back 5 years and 4 months earlier to Los Angeles. Young Marla Mabrey (Lily Collins) arrives in LA with her mother (Annette Bening). She is to have a screen test with other novices. Marla has won "Apple Blossom Queen" in Virginia. Her mother is a strict Baptist, and Marla is a Baptist virgin.

Beatty has something in common with Marla. He too was born in Virginia and spent formative years there, and his parents were strict Baptists.

One of the primary themes in many of Beatty's films is sex in America. In Rules Don't Apply, sexual Puritanism still reigns in America. Beatty himself seems to have had something to do with changing that. He became the Playboy poster boy for a new sexuality.

In Rules Don't Apply, Marla is one of a bevy of potential starlets given a private bungalow and assigned a driver as they await their screen tests. Marla's driver is Frank Forbes (Alden Ehrenreich), who is forbidden by contract to have any personal contact with the girl whom he is driving. They break that rule and others to come.

Rules Don't Apply shouldn't work. The first part is drab, and Marla and Frank seem hardly capable of carrying a film. But the two young actors - Lily Collins and Alden Ehrenreich - are credible, and their characters evolve.

And the film finds its essence when the flamboyant but secretive Howard Hughes creeps on the scene. Hughes seems simple, but there are significant layers to Beatty's artful performance.

Hughes has growing relationships with the two ambitious young people. He is the distant authoritarian figure, but on occasion he is a mentor to each of them. Frank becomes more than just a driver, and Marla becomes more that just a would-be starlet.

Lines are crossed - rules are broken.

The American Dream becomes the American Success Story, but at what cost? The Dream still haunts as success shrivels it.

Beatty always has shown an unfulfilled penchant for comedy, and it's hardly ever been satisfied. Warren and Jack Nicholson futzed around with newcomer Stockard Channing in The Fortune (1975), directed by Mike Nichols. The film is pleasant but negligible. He and Dustin Hoffman bombed in Ishtar (1987).

1937 was a fertile year for births of great movie actors. Maybe the best ever. Warren, Jack, and Dustin all were born in 1937. So were Anthony Hopkins, Morgan Freeman, and Jane Fonda. All still are living.

Warren starred in the romantic comedy Town and Country (2001), which was misbegotten. There are some screwball elements in Rules Don't Apply, but they're not essential. Beatty's desire for sustained comedy still seems unfulfilled.

Beatty hasn't directed a film since Bulworth (1998). His only Oscar was for his direction of Reds.

In Rules Don't Apply it was time for Warren to strike again. No more stalling.

Rules Don't Apply is a deceptive anthem of Warren's values.

I brought several personal events to my viewing.

I had the most profound experience I ever had in a movie theater (in NY City) when I first saw Bonnie & Clyde. It was directed by Arthur Penn and starred Warren and Faye Dunaway. It was produced by Beatty.

At the end of the picture, after editor Dede Allen's classic editing of the blood-spattered ballet of death, no character spoke on screen. And no one said a word as we left the theater. We were shaken by the artistry and power of the experience. It was stunning.

I also saw Beatty work his magic in a hotel bar in Chicago. He was with Michelle Phillips of the Mamas and the Papas. Journalists at another table were not impressed. They were all male.

The next day I had a memorable interview with Warren. He was promoting Shampoo, which he had produced.

I asked him whether or not the character Jackie (Julie Christie) was an allusion to Jackie Kennedy. He said, "No." But a moment later, he hesitated and then said, "That's a fascinating question."

Later he told a critic friend of mine, "That son of a bitch saw something in my film that I didn't see."

Warren Beatty called me a son of a bitch.

And it was a compliment.

Warren Beatty has assembled a stellar cast for Rules Don't Apply. Some of them, such as Candice Bergen and Steve Coogan, aren't fully utilized. But it's an impressive bunch, including his wife Annette Bening, Martin Sheen, Matthew Broderick, Oliver Platt, and Taissa Farmiga.

Ehenreich and Collins fit their roles. I wonder if Beatty saw some of Carly Simon and her story in Marla.

In a wonderful scene - evocatively photographed by Caleb Deschanel - Marla sits in the near-dark, playing on the piano, singing to Hughes a song she wrote. Behind her on a screen is footage from Hell's Angels (1930), a movie produced and partially directed by Hughes.

We can't be sure how much Beatty and Hughes overlap. Beatty played vulnerable outsiders, and Hughes was one.

In Rules Don't Apply, Hughes says, "Don't trust anybody... You can only trust you." That probably is a shared observation.

And the theme of the absent father is paramount in Rules Don't Apply. Frank's father left him. Marla's is absent. And Hughes seems obsessed with the loss of father.

A young boy sees the haggard Hughes lying in bed, and he says Hughes looks like he thought he would. Where did that come from?

In Rules Don't Apply, meaning is beyond the surface.

Beyond the surface is where Warren Beatty has lived.