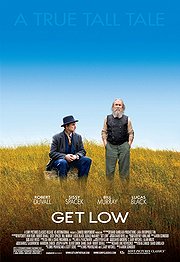 Robert Duvall is an acting treasure.

The 79-year old actor has had some of the most memorable roles in American movie history -- often as a supporting actor.

And on occasion he has stepped into the lead -- and excelled. Duvall won the Oscar as Best Actor for his performance as Mac Sledge in Tender Mercies (1983). It was one of six Oscar nominations for acting he has received.

He has served as executive producer on some films, which seem labors of love. The Apostle (1997) is a glittering example. It provided the opportunity for a tours de force performance by Duvall.

Recently Duvall has stepped up again. He is executive producer with producer Dean Zanuck (grandson of Darryl F. Zanuck) in a project which took eight years to reach fruition -- indie film Get Low.

Bush has been a recluse for forty years in an isolated cabin in the Tennessee woods, harboring a secret that has stunted his life. No one except an old preacher (Bill Cobbs), now living in another state, knows his dreadful secret.

During the years in self-imposed exile, Felix has had a myth created around him. He has an image as a dangerous, threatening menace.

Felix decides that he wants to have his funeral while he is still alive, so that people can come to tell stories about him. That way his own, deep, dark secret may emerge.

After he is not able to arrange a satisfactory agreement from a local preacher, Felix is approached by Buddy (Lucas Black), an undertaker's young assistant, who expresses his boss's (Bill Murray) offer to fulfill Felix's wishes.

They agree to have a party and raffle off Felix's property to draw a crowd. The big question is whether or not Felix finally can face the truth.

Duvall has to carry the movie on his bony shoulders, and he does a yeoman job. Felix is a curmudgeon set in his recalcitrant ways, but he's also sly and aware. Undertaker Frank Quinn says of him, "Is he extremely articulate when he wants to be?" It seems so.

Sissy Spacek portrays Maggie, a woman who once had a romantic relationship with Felix. She's returned to the area after her husband has died. Bill Cobbs is effective as the African-American preacher who keeps stoking Felix's conscience.

Along with depending on other gifted actors, also important in many of Duvall's movies is their setting. Get Low is set in a rural town in Tennessee in the 1930s. It helps the authenticity.

Director Aaron Schneider, who also is the editor, keeps his film cruising along, although the music is more blatant than the rest of it. The strings keep twanging, plucking, and crooning. I half expected to see Bonnie and Clyde.

The script by Chris Provenzano and C. Gaby Mitchell is basic with an occasional subtle touch, e.g., in a distant shot Felix explaining how to prepare the roots he gives her.

Get Low is a slice of folksy angst, which Robert Duvall seizes with a firm grasp. It's a movie about approaching death, given vibrant life by its wonderful leading actor.