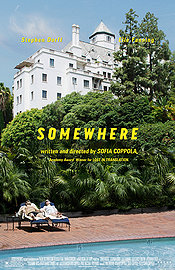 The major challenge in making a movie about ennui is how do you keep it from being dull?

Writer/director Sofia Coppola seems stymied by that test. Her movie Somewhere is a listless look at essentially dull people. Her presentation is mostly mannerisms.

One would think that because Sofia is the daughter of a successful, world-travelling director, she would be able to invest her movie with some unique, personal experience about the relationship between a daughter and distant father which would enliven her film.

I would guess that at one time Sofia made Eggs Benedict for her father, but when Cleo does so in the movie it is merely negligible.

Sofia's main character is Johnny Marco (Stephen Dorff), an action movie star, who says, "I do my own stunts." But his only stunt is falling off screen. Granted his character is stunted.

Offscreen Johnny is scruffy and vapid. We never see him on screen, but he's just completed a movie and is living at the fabled Chateau Marmont hotel in West Hollywood, while promoting the movie.

Johnny is going through the motions of living. The world around him is more vacuous than he is, although parties and nude women are in close proximity.

When his ex-wife drops off his 11-year old daughter Cleo (Elle Fanning), Johnny makes some effort to entertain the girl: watching her skating, playing games with her, eating together, and basking by the pool. He's still a remote father. He doesn't even know she has been taking skating lessons for years.

The unhappy ex-wife calls Johnny to tell him that she is going away for a while, and instructs him to take the daughter to camp. So his relationship lasts a little longer than he planned. Cleo accompanies him to an awards ceremony in Italy and goes with him to Las Vegas on the way to camp.

She departs in a camp car, leaving him to return to the Chateau Marmont. Is he changed?

Sofia decides to show us in a pretentious, nonsensical ending.

In Somewhere Sofia Coppola meanders into the territory of Michelangelo Antonioni, the Italian director who made ennui into art. She makes ennui into ennui.

In Somewhere -- as in Antonioni's films -- place and environment dominate, and humanity is transitory.

Sofia opens Somewhere with the sound of an engine and no image. Then we see a black Ferrari going round and round in the desert -- entering and leaving the immobile frame. Maybe the driver is looking for Zabriskie Point.

Finally the car stops. A man -- eventually we find out it is Johnny Marco -- steps out. He stands. And the screen goes black. At that point we should know we're in trouble.

Later ala Antonioni there is an image of the man floating on a raft in a swimming pool, and drifting halfway out of the image. Location endures; man drifts away. The cinematography by gifted Harris Savides is an asset.

A movie can be about dullness if the director has a sharp eye and ear. It's hard to believe Sofia Coppola won an Oscar for her screenplay for Lost in Translation (2003).

The dialogue in Somewhere doesn't have a memorable line. It's often weak:

Johnny: "Shouldn't you be in school today?"

That's like a leftover bit from an ESPN commercial.

Somewhere is almost totally without insight or originality. One can be original -- see Antonioni -- in portraying ennui.

The only sequence in Somewhere that is original and real is when Johnny has to sit with his head embalmed in a head mask (to show age) that is hardening. We only hear his breathing. It's the one indelible sequence in the entire movie.

There's a sequence with two, blonde twins gyrating and swinging on poles in Johnny's room, which is to show that they have no effect. In the film, the sequence has no effect. It may have seemed clever on the page; it's dumb in the movie. And it's repeated -- this time with tennis rackets. What's worse than ennui? A bad idea repeated.

Sofia also concocts a tired segment of a press conference with journalistic nitwits. Been there, done that. And her awards ceremony in Italy -- which Johnny and Cleo attend -- is labored and obvious.

Dorff is more Mark Frechette in Zabriskie Point (1970) than Jack Nicholson in Antonioni's The Passenger (1975).

Ironically Dorff gave perhaps his strongest and most lively performance in Bob Rafelson's Blood and Wine (1996) as the stepson who fought a character played by Nicholson.

Jack Nicholson is the prince of alienation in a multitude of movies, and in The Passenger he and Antonioni created ennui-stricken journalist who had verve and humanity.

Dorff and Coppola can't compete. The best they can do is sketchy.

In La Dolce Vita (1960) Federico Fellini and Marcello Mastroianni created a character whose ennui was very human. One imagines what Mastroianni would have done with the scene in which Johnny is lost on stage during a dance routine at the awards ceremony in Italy.

Elle Fanning is likeable as Cleo. Her subtle expression of glaring disapproval at her father for the woman joining them in a robe for breakfast is nifty.

In the credits at the end of Somewhere, Sofia Coppola thanks her mom and dad.

I hope the Coppola home movies have more vitality.