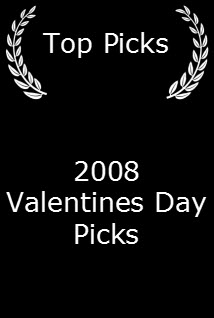 Valentine’s Day is an ideal time to recommend movies to lovers. There are the tried-and-not-always-true classics, such as Titanic, Casablanca, Gone with the Wind, and The Way We Were.

And there are others, which are personal.

Here are ten of my favorites, which I can recommend to those who have been smitten and/or splattered by love.

Yes, it’s Italian, and it’s subtitled, and it’s long, but it’s one of the most evocative movies ever made about love, and passion for the movies. Cinema Paradiso is the story of a young boy who grows up having a great friendship with the local theater’s projectionist (the wonderful Philippe Noiret). But the boy grows up into a man who has lost his faith in humanity. The movies bring him back to life.

Near the end, there is a montage of kisses from different movies that is exquisite and exhilirating. In Cinema Paradiso, directed by Giuseppe Tornatore, the music by Ennio Morricone casts a haunting spell. If you want violins and kisses on Valentine’s Day, this is the movie for you.

This is a Chick Flick that guys can stand. It’s about two piano-playing brothers, and the bumpy relationship between one of them and a singer. The Baker Boys are played by the Bridges brothers — Jeff and Beau, and the singer is Michelle Pfeiffer. Michelle Pfeiffer does her own singing, and while not a great singer, she is impressive. Her rendition of “Makin’ Whoopee,” while atop a piano, is a heart stopper. And her version of “My Funny Valentine,” during the final credit, is enticing.

Jeff Bridges is a man’s man. Michelle Pfeiffer is a man’s woman. Together they make sparks.

Hitchcock’s ironic vision of lost love is harrowing; even if you’ve been recently dumped, what happens to Scotty Ferguson (James Stewart) shows you it could be worse.

Scotty, who is obsessed with Madeleine (luminous Kim Novak), loses his love not once, but twice. Vertigo is a nihilistic vision of obsessive love. Bernard Herrmann’s music scores the soul. If you want light-hearted Hitch, see North by Northwest. If you want dark-hearted Hitch, Vertigo gives you gloom.

Director Billy Wilder has a reputation for pungent bittersweetness. This is his sweetest movie. Avanti! is the story of an uptight businessman (Jack Lemmon), who goes to a romantic island to recover the body of his father, who died in a car accident. He finds out that dear ol’ dad had an annual rendezvous with a woman who wasn’t his mother.

Frustrated and angry, he fights with the daughter (Juliet Mills) of the woman, who died in the accident. But the island warms them, and they let down their defenses. The odd couple fall in love.

Last year’s best movie about star-crossed lovers has an explosive performance by Marion Cotillard as neurotic, French songbird Edith Piaf. It’s subtitled, but the songs and dramatics are potent. Cotillard has been nominated for an Academy Award as Best Actress. She deserves it.

Fans of westerns shouldn’t be forgotten on Valentine’s Day. Director Sam Peckinpah is known for vivid violence, but The Ballad of Cable Hogue is a poem. It is a lyrical love story — love for a woman, and love for a West that is passing. Stella Stevens is Hildy, who is a whore — remember this is Peckinpah — with whom Cable (Jason Robards, Jr.) falls head over spurs in love. They change each other’s lives. “Butterfly Mornings” is an enchanting song. Hildy is an enchanting character. The Ballad of Cable Hogue is an enchanting movie.

David Mamet directed this version of the classic play by Terence Rattigan, and cast his wife Rebecca Pidgeon. The dialogue is literate and sharp. Jeremy Northam is grace and flint as the lawyer and politician who risks his career to defend a boy who is expelled from military school for stealing. Pidgeon and Nothram are credible and engaging as equals in the Battle of the Sexes.

Masterly French director Francois Truffaut with Catherine (Jeanne Moreau) creates the most memorable portrait of an independent woman ever in movies. Catherine is not ruled by her love for Jules (Oskar Werner) or her love for Jim (Henri Serre). She even tries to rule fate. The music by Georges Delerue is intoxicating.

Basically ignored when it was released in 2006, this movie about author Beatrix Potter (Renee Zellwegger) and her publisher (Ewan McGregor) is charming. And, of course, Peter Rabbit cavorts.

Gerard Butler got his fame in 300, Beowulf, and The Phantom of the Opera, but he shows earnest humanity in Dear Frankie. Butler plays a sailor who is asked by a woman (Emily Mortimer) to pretend to be the father of a nine-year old (Jack McElhone) who has never known his father. it’s a sentimental concept, but Butler and Mortimer raise it up a level. It’s a touching movie.

Wine, chocolate, and any of these movies should give you a memorable Valentine’s Day.