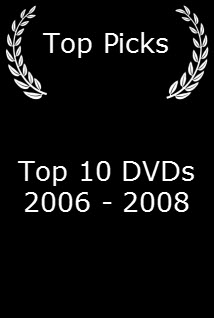 Labor Day Weekend is a great time to catch up on DVDs.

The following is a list of 10 movies I appreciated, whose DVDs were released within the last two years. There should be something for everyone.

Hot Fuzz, a British comedy/drama, is bloody good in both senses of the word. But the graphic blood is more chocolate syrup than true gore. It has some subtlety, in the throwaway lines particularly an old man’s comment about a female cop. And it is stylish.

It has a superior cast: Simon Pegg, Nick Frost, Jim Broadbent, and even Timothy Dalton who once played James Bond. Thank goodness, Hot Fuzz has Simon Pegg rather than Ben Stiller.

Pegg plays a cop reassigned to a small, rural village, who finds more crime and intrigue than there it appears on the surface. Hot Fuzz is co-writer Pegg’s and co-writer/director Edgar Wright’s follow-up to the very popular Shaun of the Dead (2004) a comic send-up of zombie movies. It may take a little time to get on their wavelength, but if you can, Hot Fuzz is a treat.

2. The Lookout. Of all the offbeat movies I’ve recommended in the last two years, this is the most surefire. People really like it.

Terrific young actor Joseph Gordon-Levitt plays a survivor of a car accident who is mentally-damaged. He is duped into participating in a bank robbery, with ironic results. Jeff Daniels renders a wonderful performance as his blind mentor.

The Lookout, written and directed by Scott Frank, is a worthy achievement.

The original, 11-hour film version was on British television; it then appeared on the USA TV on Masterpiece Theater. It may well be my favorite TV shows of all-time.

Brideshead Revisited is human and brilliant. It not only is classic TV; it is classic art. Now, if you have 11 hours to spare…

TWO MOVIES THAT I LIKED MORE THAN MOST REVIEWERS

1. Street Kings. This is a slam-bang cop saga. It’s directed by David Ayers and based on material written by James Ellroy (who wrote L.A. Confidential). Keanu Reeves gives a solid performance.

2. What Happens in Vegas. I enjoyed the spirited, comic byplay between Cameron Diaz and Ashton Kutcher, two likable actors. It’s a pleasant romp.

BLEAK BUT WORTHY FOR THE PERFORMANCES

2. The Savages. Philip Seymour Hoffman, Laura Linney and Tony-winner Philip Bosco struggle in this drama of a dysfunctional familial trio. Tamara Jenkins wrote and directed. If you can last until the end, The Savages has one of the best endings in years.

TWO OSCAR-WINNING FEMALE PERFORMANCES YOU DEFINITELY SHOULD HAVE SEEN

1. The Queen. If you somehow missed this, what are you waiting for? Helen Mirren with subtle range captures the many layers of the monarch when faced with Princess Di’s death. The symbolism is a bit arch, but Stephen Frears directs with panache and Michael Sheen adds quality as the young Prime Minister Tony Blair.

LAST BUT NOT LEAST

1. The Bank Job. If you don’t want to see Jason Statham as a race dummy in Death Race presently at the theaters, you can watch him give a real performance in The Bank Job. It’s based on an actual robbery in Britain and Stratham portrays a man caught in the middle. The man actually can act. Saffron Burrows adds nice spice and that’s the perfect way to end a holiday weekend.

Scott Pilgrim vs. the World

What Happens in Vegas