Who's it gonna be? Tony Macklin places his bets on the Oscars 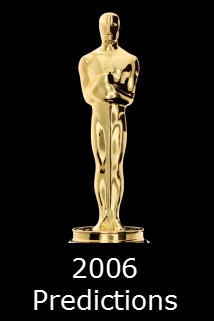 What happens in Vegas stays in Vegas -- unless it's betting on the Oscars. Then you have to go abroad. Boy, do I wish I was in Curacao, Netherlands Antilles.

You can't bet on the Oscars in the United States, but Pinnacle Sports in Curacao has odds on all six major categories of the Academy Awards. Over the years I have done pretty well picking out a sure winner or two. But this year Pinnacle has stopped taking action from the U.S. because of a crackdown on gambling by the American government. More war, less gambling.

Two weeks before the ceremonies, looking over the odds from Pinnacle, one sees a lock, but it's too prohibitive to bet. If you wanted to wager on Helen Mirren to win Best Actress for her performance in The Queen, to win $100 you would have to bet $6,567.00. Now that's a lock. If you're going to an Oscar party, offer people the other four nominees in the Best Actress category at 10-1 or even 20-1, and hope some poor sucker thinks that's inviting. Mirren may be the most certain winning wager of all time.

If Helen Mirren is the all-time lock, Best Picture is surprisingly open. All five nominees are better than even money. Even the favorite The Departed pays $122 for a $100 wager (total payback $222). That's not bad. I'd take a play on that. I'd ignore the second choice Little Miss Sunshine at $100 to win $213 (total $313), even though it won Best Ensemble at the Screen Actors Guild Awards I think it has little chance. I'd put $100 on my favorite Babel at $100 to win $400 (total $500), and I might take a wild flyer on the longest shot The Queen at + $1,150. I'd bypass Letters from Iwo Jima (+$900), which I think is the most important film of the year, but Clint Eastwood has had his "make my year" Best Picture twice.

My personal lock of the year is director Marty Scorsese (The Departed) at -$456. Nobody wants to give almost 5-1, but Marty is a sure thing. It's a done deal. Free money. It's not only Marty's turn -- he's never won -- but he received the Directors Guild Award, which is a sterling harbinger of an Oscar to come.

In perhaps the most intriguing battle this year Forest Whitaker (-$612) is the heavy favorite over Peter O'Toole (+$506) for his brilliant performance in The Last King of Scotland against O'Toole's nostalgic turn in Venus. I might put a small flyer on OToole, but the line says that Whitaker will win. Like Scorsese, O'Toole has never won for his work on a film (he did receive an honorary Oscar), and he should join Richard Burton and Cary Grant as foreign born actors who never won an Oscar, even though they were icons.

Here are the contenders:

The Departed will win.

Although The Departed is not one of Scorsese's best films, it is more substantial than one might think. For cineastes I recommend Rene Rodriguez's article January 11 in the Miami Herald, about how Scorsese used X's "as symbols of impending doom." It's a revelation of Scorsese's deft use of the medium. Adapted from Hong Kong's Infernal Affairs, The Departed only garnered one acting nomination (Mark Wahlberg as Supporting Actor), but Scorsese's masterly direction could give it the big X.

My Favorite: Babel (Babel -- rhymes with able -- not rabble) It is a complex, beautifully executed vision of the human condition.

Sleeper: The Queen. I thought it had a slight chance, until I saw the odds.

My Favorite: Whitaker and O'Toole. I wish they could tie.

Eddie Murphy will win for Dreamgirls.

Sleeper: Alan Arkin. Don't count Arkin out. He has a real chance, and could be the upset of the Oscars.

Jennifer Hudson will win for Dreamgirls.

Despite offscreen becoming a too-much-fame-too-fast diva, she's a deserving favorite.

My Favorite: Cate Blanchett for Babel. The divine Cate.

Sleeper: Abigail Breslin for Little Miss Sunshine. Since this award is often the awkward age award -- going to the very young or very old -- Little Miss B may have a shot.

Now if I could only get a ride to Curacao. Where are Hope and Crosby?