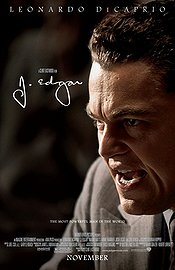 J. Edgar is not arresting.

It's more like a lengthy, failed stakeout. It doesn't deliver enough authentic evidence, and the subject of the scrutiny is pretty dull most of the time.

Has director Clint Eastwood turned into Danny DeVito? DeVito directed a negligible movie Hoffa (1992), with a bravura performance by Jack Nicholson as the title figure Jimmy Hoffa. But it wasn't a bravura movie.

Eastwood has just made a neligible movie about J. Edgar Hoover, with a bravura performance by Leonardo DiCaprio as the title figure. But it's more ponderous than bravura.

J. Edgar is the convoluted tale of Hoover's rise to power, using the FBI and self-promotion. He is almost a figure of claymation.

J. Edgar is medicated Citizen Kane, without the Citizen, and without the Kane. It's closer to Mr. Ed-gar. Oliver Stone used the Orson Welles classic as a potent source in his underrated Nixon (1995).

The writer of J. Edgar, Dustin Lance Black, who wrote the impressive film Milk (2008) about Harvey Milk, has glimpsed Citizen Kane (1941) and figured out that the quest for love is a strong motivation. Not always.

Although J. Edgar is something of a snow job, it has no sled. Tommy guns must suffice.

The key relationship in the movie -- between J. Edgar and his lifelong assistant Clyde Tolson (Armie Hammer) -- is the elephant stuck coming out of the closet.

Eastwood seems leery of focusing it. He makes the decision to keep it erratic and "ambiguous." There can be -- and perhaps should be -- clarity in ambiguity. But there's an uncertainty to Eastwood's handling of the relationship.

Were Hoover and Tolson homosexual? Was the homosexuality primarily latent? There's an indecisiveness to its exploration. It doesn't have to be blatant -- perhaps two shots are -- but the evolution is clumsy.

Leonardo DiCaprio has said he doesn't know whether Hoover was homosexual. Leo, as an actor, uh, shouldn't you decide?

"Yes, I am; no I'm not" may not be the basis for an astute performance.

Clint has always been one for clarity. J. Edgar is convoluted posturing.

Because J. Edgar remains undefined, the two major women in his life in the film also remain undefined. His mother (Judi Dench) and his lifelong secretary Helen Gandy (Naomi Watts) often are just bystanders. In an awkward speech, his mother does remind Edgar about a man they knew who was called "Daffy" for Daffodil, because of his predilections.

But in the movie J. Edgar is a wallflower.

In J. Edgar the FBI seems an assemblage of rather bland extras.

Few of the sequences have much energy. It's as though the unwieldy image of J. Edgar weighs Clint down.

J. Edgar's America is not Clint's America. That is the rub (given by Clyde Tolson?).

I was baffled when I heard that Clint was scheduled to direct another remake of A Star is Born. Beyonce was to star. But isn't that like remaking Citizen Kane with Samuel L. Jackson? Why?

Beyonce got pregnant, so that's been postponed. A Little Beyonce is Born seems preferable. May the stork prevail.

In the last decade Clint was perhaps the boldest of the A-list directors. Warner Bros. originally rejected Million Dollar Baby (2005), but he enlisted Lakeshore, and the movie got afloat and won the Best Picture Oscar.

Eastwood went on to make Flags of Our Fathers (2006) and Letters from Iwo Jima (2006) -- the latter a remarkable achievement. Clint directed a nice nostalgic movie Gran Torino (2008) which had his deft touch. It knew where it was going and how to get there.

J. Edgar goes down a bumpy road; it's a jumble of themes. Perhaps the most incisive is how media makes "stars." It's a meaningful theme, but it's not emphasized until well into the movie, and then haphazardly. And it gets blunted by erratic editing and writing.

At times it almost seems as though Clint wants J. Edgar to dance back into the closet. Some audiences would prefer that.