"The future, Mr. Gits, the future" 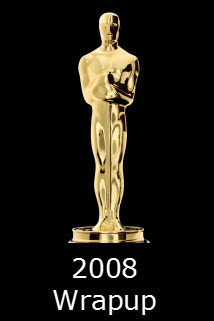 Were the 2008 Oscar Awards and Oscar ceremonies a harbinger of things to come?

The ascendancy of Slumdog Millionaire gave great hope to independent filmmakers, but it's an aberration.

The weekend of the Oscar ceremonies Slumdog had made $98 million, but Paul Blart, Mall Cop had copped $121 million in just four weeks.

The totally unexpected success of Slumdog Millionaire makes a warm story; Paul Blart is hot box office. Which do you think is the barometer for Hollywood?

And then there were the ceremonies themselves. The audience for the television show was a surprising 13% improvement. And the majority of viewers seemed satisfied by the production.

But who exactly is the target audience for the Academy Awards program these days?

Young adults probably did not see any of the movies nominated as Best Picture. Middle-aged patrons may have seen one. Even most of the people who love movies didn't see all five. (If you did, you're a true cineaste and a rare bird.)

So given the diversity of viewership, the tv show's aim was scattershot.

In his Oscar-hosting debut, Hugh Jackman had the unenviable task of running, dancing, singing, kibitzing, and gasping. Wolverine might have been up to the task; Jackman just survived.

Jackman tried to bridge Broadway (where audiences saw him win a Tony in The Boy from Oz) and the Land of Celebrity (People magazine dubbed Jackman -- 2008's "Sexiest Man Alive.")

There was something for everyone, but not much for anyone. The greatest disappointments were the clips from movies and the inchoate tribute to those who died in 2008, usually an emotionally memorable part of the ceremonies.

There was an obvious outreach to viewers whose attention span is three seconds -- the action clips were action without impact. There was no context.

Another example of style without substance was the tribute for those who had passed. The Oscar ceremony botched this by keeping the images of the departed in the distance. The feature didn't even start until Cyd Charisse's tribute was ending, and she disappeared before the audience could see her.

The montage of actress winners of the past saying "Thank you" was silly and meaningless. One substantial clip of nominator Sophia Loren in the classic Two Women (1961) would have blown away all the blithering "thank yous."

But the past was not much of a priority for the ceremonies. Ironically the most effective new concept was having five past winners nominate each acting candidate. Their intros were heartfelt and convincing.

The best may have been Robert De Niro's paean to Sean Penn. I have never heard De Niro speak so well in public.

I'm still trying to figure out why Ben Kingsley gave the nominating speech for Mickey Rourke. Was it because Rourke reminded the Oscar mavens of Gandhi? Or was it because Kingsley in You Kill Me (2007) played a hitman in AA?

Most people watch the Oscars on tv hoping for spontaneity, but it was in short supply. There were a few spontaneous moments -- Kate Winslet's dad whistling back to her shout out from the dais; Man on Wire's Philippe Petit's disappearing coin trick and his balancing an Oscar on his forehead; and Slumdog's director Danny Boyle's Tigger hop for his kids.

There were a few composed delights -- James Franco's and Seth Rogen's skit of being on a sofa and watching the nominated movies, and Ben Stiller's take-off of Joaquin Phoenix's appearance on the Late Show with David Letterman.

Until the latter parts of the ceremonies, politics took a backseat. But then came Sean Penn as Huey Long Milk. Penn, who never met a moment of subtlety he couldn't trample, made a patented political statement.

I'm not sure accusing audience members -- who may have voted for you -- of a shameful action makes much sense for tv watchers.

Penn preached to the choir, disconcerted those of us who are sympathetic to the cause, and probably offended everybody else.

Clint Eastwood once told me that when Penn showed him a letter he was writing to GW, Clint told him to tone it down. Penn is tone deaf.

Penn's comments might have been needed if it weren't for a previous statement by Dustin Lance Black, the writer of Milk. Black, sensitively and appealingly, made an acceptance speech in which he spoke very personally about the pain of being gay as a youth. He shared insight everybody could understand.

Sean Penn should learn from the family of Heath Ledger -- his father, mother, and sister -- who let their time on stage carry its own impact. They were tasteful, held back their tears, and brought tears to the audience.

May the Oscars in 2009 have more Tigger and less Tinman. Give Wolverine back his blades. And take Penn's away.