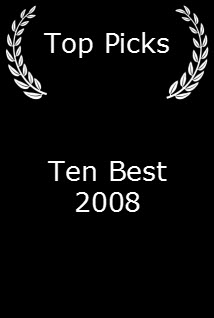 My four basic critical criteria are:

The following films, in different degrees, meet those criteria. Here are the best films of 2008, according to one man's personal perceptions:

It is a pitch-perfect anthem of decency.

Richard Jenkins portrays 62-year old Walter Vale, an alienated, widowed professor from Connecticut, who goes to New York City to deliver a paper at a convention.

The young man Tarek (Haaz Sleiman) is from Syria, and his girlfriend (Danai Gurira) is from Senegal.

The relationship between the weary teacher and the gregarious young man, who is a talented drummer, is tested by fate and inhumanity. But, blessedly, communication prevails.

Jenkins -- a character actor of the first order -- gets a chance at a leading role, and he is wonderful.

Writer/director Tom McCarthy, who did The Station Agent (2003), has crafted an intimate gem.

This is the triumphant return of Woody Allen. Allen wrote and directed VCB, but didn't act in it. Reminiscent of Francois Truffaut's Jules and Jim (1962), and like The Visitor, this is a film about communication and the human spirit.

Vicky Cristina Barcelona is a travelogue through relationships, psyches, and human hearts. Vicky (Rebecca Hall) has to make a life-defining decision about the risks she is willing to take for love.

Allen has made a provocative mixture of character, theme, and style.

This is actor Frank Langella's film.

Like Richard Jenkins, Langella is not a household name. (He's not even an apartment name.) He may be a New York and London stage figure, and a face one might recognize from tv's Law and Order. But he's hardly known.

In this Ron Howard-directed movie about the tv interview between Nixon and David Frost (Michael Sheen), Langella is remarkable as the former president -- willful, wounded, crude, cunning. And totally memorable.

I really feared Clint Eastwood's going back to acting. He has been a stellar director lately, but how could this 78-year old return to the screen? I hoped he just wouldn't embarrass himself.

Me of little faith.

Clint is terrific as a gruff, ferociously anti-social, bigoted, Korean War veteran, who bonds with a young Asian lad and faces gang conflict.

Clint beautifully plays off his own image. Watch how many times he fires his guns. And, the last image of Clint in Gran Torino is classic.

Clint is the Man.

Every year I seek a Hitchcockian movie, and Transsiberian is this year's choice.

Artfully directed by Brad Anderson Transsiberian is mostly set on a train trek across threatening tundra from China and Mongolia to Moscow.

Emily Watson and Woody Harrelson portray a young couple caught in the wheels of drug smuggling. Ben Kingsley -- who has moved far away from playing Gandhi-like roles -- adds menacing character to this intriguing, suspenseful movie.

I'm still a sucker for Clint. This movie -- based on an actual case that began in 1928 -- has texture and impact.

Directed by Eastwood, Angelina Jolie gives a bravura performance as a woman whose son is kidnapped. Like Eastwood himself, the woman will not settle, and goes on a harrowing mission to seek the truth.

Sean Penn and director Gus Van Sant combine to create this warm tribute to Harvey Milk, who was the first openly gay person to be elected to major political office (San Francisco's Board of Supervisors). Milk then was murdered/martyred.

James Franco and Alison Pill add to the sanguinity of the film.

Heath Ledger is memorably volatile as The Joker.

Oliver Stone seems an improbable director to create a human portrait of 43, but with Josh Brolin's brilliance, he does.

Brolin is outstanding as GW Bush. Richard Dreyfuss is spot-on as Dick Cheney.

This is an entertaining, amusing movie that draws chuckles from unlikely sources.

Better to laugh than cry.

This may be my albatross. I may be in the distinct minority in affirming this movie. I don't yet know how it will play with the public. (I do know some reviewers who detested it.)

Seven Pounds worked for me, and I would make a small wager it will with the general public. It's about a tormented Good Samaritan who tries to help seven strangers. I accepted the premise and loved Rosario Dawson. I think Will Smith, director Gabriele Muccino, and writer Grant Nieporte, have made a bold, challenging movie.

Some other movies I favored: The Wrestler, Appaloosa, Iron Man, Bottle Shock, Street Kings, Man on a Wire, Mongol, Bolt, Under the Same Moon, and Smart People.

And so it goes. Theaters beckon, and movies sparkle. At least a few.