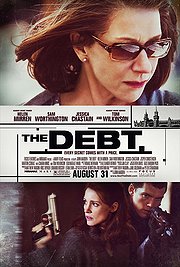 Films about bringing vile Nazi doctors to justice usually are serious dramatic and psychological explorations. But every once in a while, hokum overwhelms the subject.

Such is the case with The Debt.

Despite a stellar cast and experienced director, The Debt is a hodgepodge.

Most probably, it's the three new writers. Two writers wrote the original Israeli movie Ha-Hov (2007), which The Debt remakes. The Israeli writers were director Assaf Bernstein and Ido Rosenblum. The new writers are Jane Goldman, Matthew Vaughn, and Peter Straughan.

The three new writers for The Debt muddle the original in an awkward attempt to make it their own. In trying to put their own stamp on it, they botch it.

They make changes merely for the sake of change. They change the Nazi doctor's name from Max Rainer to Bernhardt/Dieter Vogel. That's very creative.

They change the plot from having the major character Rachel publishing her memoirs to her daughter writing a book about her mother's exploits. This allows for some very weak scenes between anxious mother (Helen Mirren) and doting daughter (Romi Aboulfia) at the gathering for the launching of the book.

There also is a Hallmark Greeting Card shot of Rachel watching her daughter and family gamboling on the beach. Ah, family values.

The new writers also change the crucial report of the doctor's death in East Berlin from a suicide to a shooting. This allows young Rachel (Jessica Chastain) to be a female Bourne. Wrong movie.

Most of all, the original (which has been shown on tv's Sundance Channel) has a clarity the remake sorely lacks. The writers try to add suspense; they merely add murk.

The Debt is the story of a trio of young Mossad agents who in 1965-66 go to Berlin on a mission to abduct a Nazi war criminal who committed unspeakable surgeries in a concentration camp.

The doctor is now practicing normal obstetrics in East Berlin. Rachel visits the stirrups thee different times as she prepares to abduct him. I must admit I prefer stirrups in westerns.

She and her two fellow agents are going to take him to a safe house in East Berlin, and then to Israel for justice.

Things go awry. They are trapped for longer than they intended. Rachel becomes claustrophobic, and her fellow agents -- Stephan (Marton Csokas) and David (Sam Worthington) -- feel the severe pressures of confinement.

The mission ends differently from what they planned, but they are hailed as heroes.

The early part of The Debt is set more than 30 years later at the book launch in 1997. The trio of agents, now old, have to face the past.

The cast struggles with their characters and chemistry. Helen Mirren, as older Rachel, looks constipated throughout. Tom Wilkinson, as older Stephan, scowls even more than usual.

Jessica Chastain, who exhibited airiness in Tree of Life (2011), exhibits airlessness as the young Rachel.

Ironically, as the evil doctor, Jesper Christensen develops the character who seems the most human and layered, because he is able to play both ages. His scenes with Rachel provide a little human chemistry.

Director John Madden is not served well by his writers or his editor Alexander Berner. Berner edited 10,000 BC (2008), Alien vs. Predator (2004) and Resident Evil (2002), so it seems he may have been picked by someone in the front office who just reads titles. One can imagine a producer saying, "He can do it. It's a movie about evil, and it goes back in time."

The Debt depends on its leaps to and from two very different times. Berner doesn't just cut; he chops.

Madden's Shakespeare in Love (1998) won the Oscar as Best Picture of the Year. He was edged out for Best Director by Steven Spielberg, who won for Saving Private Ryan. That's a long time ago.

Madden, who directed Helen Mirren as Supt. Jane Tennison in an episode of Prime Suspect (1995), does not do well by her in The Debt.

Madden should remember his days of watching British telly. The BBC series Spooks brilliantly created intrigue, suspense, and character. It had wonderful writing.

The Debt is not up to the standard of Spooks by any measure.