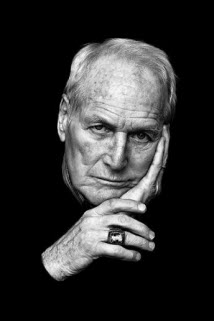 I remember seeing a clip a few years ago of Paul Newman, standing outside his dressing room trailer, angrily saying that he wasn't offered roles anymore. A year or two later, he officially retired from acting. If the blue-eyed boy was cantankerous, what hope was there for the rest of us?

Newman was a movie star par excellence. If he was frustrated in his later years, it was because Eddie Felson, Brick Pollitt and Hud Bannon inevitably had aged. The world had changed.

Newman was a glib, cool lime sherbet presence. At times he was a moral man playing amoral characters, such as Hud and Buffalo Bill. Sometimes, as with Hud, their anti-establishment attitude was amoral and destructive, but most of the time Newman's character was simply a flawed individual fighting and resisting the established system. Behind the broad grin and mesmerizing blue eyes, there was a reservoir of latent anger.

Newman's characters often had a dark side. The fact that his son committed suicide, which he found out about when he was a visiting prof in the theater department at Kenyon College in Ohio, certainly added to the dark waters in his persona.

Newman seemed anti-establishment and lived in Connecticut. He won only one Oscar, but received nine nominations. It wasn't until he teamed up with director Martin Scorsese, at the time another non-Oscar-winning easterner, that he achieved an Academy Award for Best Performance for his reprisal of the role of Eddie Felson in "The Color of Money" (1986).

The one performance by Newman that is almost always overlooked may be his best. It certainly is his most daring. Newman and iconoclastic director Bob Altman got together to make "Buffalo Bill and the Indians" (1976), a movie trashing image. Especially Newman's own. Audiences couldn't accept it.

"Buffalo Bill and the Indians" was inspired by the ee cummings poem in which the final line is, "How do you like your blue-eyed boy, Mister Death?"

Newman portrayed William Cody as a fraud. His performance is a brilliant dissection of image.

Later Altman phoned me privately to talk about the press conference. I had gotten up and asked him a question about the unity of the movie which seemed problematic, and Altman at the press conference had said there would be no changes. But later he called me and said he was changing the film and putting the scene I had questioned at the end of the movie. It changed the movie entirely, and gave Newman's performance new emphasis and a power it hadn't had. It may have been the best lesson I ever had about the importance of editing.

As a would-be iconoclast, I always appreciated Newman's courage in exposing image. It was like a politician telling the truth. But, as usual, the truth was overrated. The audiences rejected it.

Paul Newman was an actor who had a movie star's image, but he was also an actor who bravely told human truth no matter what.