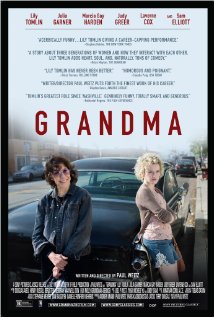 One of my all-time favorite films is About a Boy (2002), starring Hugh Grant and directed and co-scripted by Paul Weitz from Nick Hornsby's novel.

When I found out that Grandma was directed and written by Weitz, it gave me a dash of hope. Originally, I didn't have positive expectations for the premise of a lesbian grandmother (Lily Tomlin) trying to help her granddaughter (Julia Garner) get money for an abortion. It sounded like a Hallmark movie.

But it's more benchmark than Hallmark.

Weitz's touch is not as artful as it was in About a Boy, but it still is enticing. And Grandma sets out to go a lot further than About a Boy. The boy has turned into an old woman, and the world around her is more complicated and challenging.

Grandma is perky and powerful, smart and clever. There are a few flat scenes, but spunk prevails - as it did in About a Boy.

Lily Tomlin is a pistol - an old pistol, but her firing pin still works fine. In Grandma she gives a kick-ass performance as Elle Reid, the aging poetess, whose partner died more than a year before. She breaks up with a young lover (Judy Greer) at the film's beginning, and her pregnant granddaughter Sage arrives seeking help to pay for an abortion. That's the stimulus, but the film concentrates on evolving relationships.

With outbursts such as, "Jesus, fuck," Elle assaults the world around her. She's profane, impulsive, and worried.

Tomlin is an accomplished, interesting actress as she showed in Robert Benton's The Late Show (1977) with Art Carney and in Robert Altman's Nashville (1976). She can be a spitfire - her conflict with director David O. Russell on the set of I Heart Huckabees (2004) is notorious.

Weitz likes to find fresh youth. Nicholas Hoult was a gifted find in About a Boy, and this time out he uses Julia Garner with her fresh face which is appealing. Garner portrays a teenager even though she is in her very early 20s.

Marcia Gay Harden gives substance to the part of Elle's daughter and Sage's mother. She's a distinct contrast to the other two.

Sam Elliott gives a powerful performance in the single scene in which he appears. Elliott seemed like he might be becoming type-cast as the aging male, but in Grandma he gives a unique palpable performance.

Ironically in this female-centric film, the strongest and best scene in Grandma is the encounter between Karl (Elliott) and Elle. They were once a couple but haven't seen each other in 30 years. Now they are two old souls ruminating with stubbornness and regret. It's a profound moment.

Weitz's screenplay is smart. Elle and Sage talk about "mystique." For Elle, it's Betty Friedan's seminal book, The Feminine Mystique. For Sage, it's the character Mystique from the X-Men. Each doesn't know what the other is talking about. More of this clever generational disconnect would have been welcome.

Where the screenplay is a bit forced is in its connect-the-dots checklist of diversity. There's an African-American transgender tattoo artist (Laverne Cox), an Asian barista (John Cho) at a coffeehouse, and a Hispanic former friend (Elizabeth Pena) of Elle. Check, check, check.

Where Grandma refuses to falter and become Hallmarkian is in its resolution of the problem.

It will be enlightening to see how much Grandma succeeds with a general audience.

Grandma is a poem. Do people still listen to poets?