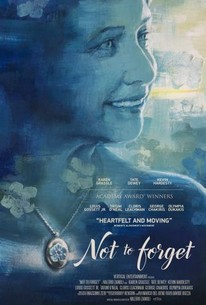 Often we don't know what happened to old actors or actresses. We don't even know if they're alive.

Occasionally, one makes a rare appearance in a major film such as Rita Moreno in Steven Spielberg's West Side Story (2021).

But usually, they vanish.

This is why the indie Not to Forget may be of some interest.

It is forgettable in itself, but it has a memorable supporting cast.

Five performers in Not to Forget have won Oscars in their past. Unfortunately, two have died since they were in the film.

Olympia Dukakis died last May 1, 2021, at age 89. In Not to Forget, Olympia Dukakis has the role of a judge, who appears twice - at beginning and end. She won an Oscar for Moonstruck (1988).

George Chakiris will be 90 in September. He plays a bank manager in two brief scenes. He won an Oscar opposite Rita Moreno in the original West Side Story (1961).

Youngster Tatem O'Neal will be 59 this September. In Not to Forget she plays a nurse. She won an Oscar for Paper Moon (1973).

Louis Gossett, Jr. turns 85 this May. In Not to Forget he plays a pastor, in the most substantial role of the five. He won an Oscar for An Officer and a Gentleman (1982).

But Not to Forget is not about actors. It is the story of a young man (Tate Dewey) who is sentenced by a judge to go to Kentucky to take care of his grandmother (Karen Grassle) for four weeks. She is suffering from Alzheimer's.

He goes looking for material wealth, but finds family.

The leading performers are not strong. Grassle plays the grandmother as a simpering presence.

Not to Forget is another indie that is not helped by omnipresent music.

The film is produced, directed, and written by Valerio Zanoli.

But Zanoli's best achievement is what he contributed as casting director in assembling the five Oscar winners.

They shouldn't be forgotten.