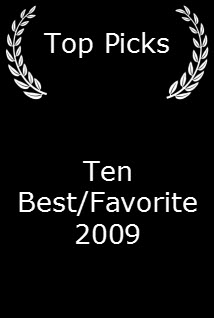 1. The Hurt Locker
There was one movie that stood out in bold relief above all the others in 2009 -- The Hurt Locker is that movie. It is a stylish, brilliant film.

2009 was not a memorable year at the movies, but The Hurt Locker seems destined to become a classic. The director Kathryn Bigelow well may be the first woman to win the Oscar as Best Director. She deserves it.

The Hurt Locker is not political -- it's a suspenseful, technical marvel that captures the sometimes terrifying experience of a Bomb Disposal Unit under pressure in Baghdad and its environs. Jeremy Renner gives a potent performance as leader of the embattled unit.

The movie succeeds on every level. The Hurt Locker was the most gripping experience I had in a movie theater this year.

Some viewers have shied away from seeing The Hurt Locker, because of the locale in which it is set, and because it appears to be a "war movie." That may not sound enticing.

But it's a different, more compelling experience from what one might expect.

The Hurt Locker has won Best Picture of the Year awards from both the Los Angeles critics and the New York critics. But what perhaps is most surprising is how much The Hurt Locker seems to appeal to women -- a seemingly unlikely audience.

The Alliance of Women Film Journalists chose The Hurt Locker as Best Film of the Year.

I'm not about to argue with those bombers.

2. Star Trek
This was one of the two movies this year that I could recommend to almost everybody. [Julie and Julia was the other one.]

You don't have to be a Trekkie [I'm not] to enjoy it immensely. It's just a good movie.

Director J.J. Abrams brings a fresh energy to the franchise by going back to the birth of Jim Kirk.

Chris Pike is boisterous and appealing as the youthful Kirk, and Zachary Quinto is cool as young Spock.

3. Public Enemies
This perhaps was the movie that initiated the strongest polar reactions. Some people hated it, but I'm a fan of director Michael Mann, and I was on his wavelength.

Many viewers reject a movie when it doesn't fit their preconceptions -- some reviewers do, too. But for me Mann is a deceptive magician -- a perfectionist who creates depth, resonance, and provocative ideas. His movies have layers, allusions, and piquant social criticism.

In Public Enemies, Mann uses the mythic figure of John Dillinger in the 1930s to weave his insightful spell.

Public Enemies has graphic novel effects and historical revelations. It reveals that the legendary "Lady in Red" at the Biograph Theater in Chicago -- outside of which Dillinger was shot to death -- actually wore orange. And Mann includes a clip from the movie Manhattan Melodrama, which was playing at the Biograph, which is powerfully ironic.

Mann also uses a torture scene which provides misinformation in an allusion to the contemporary world of the 21st century.

Public Enemies is great sustenance for the interpretive viewer.

4. Up
This movie is Pixar Animated Studio's 10th feature -- and it's a good one.

A boy and an old curmudgeon soar to heights of animated delight as they fly a balloon to South America and Paradise Falls -- the destination for which the old coot's late wife once yearned.

Jordan Nagai and Ed Asner give voice and personality to the odd couple.

A bird named Kevin and a dog named Dug enliven the proceedings.

Up goes way up.

5. Julie and Julia
This movie has the most infectious performance of the year with Meryl Streep as fabled cook Julia Childs. One couldn't help smiling at her delightful shtik.

Director/screenwriter Nora Ephon didn't give us the ending we may have wanted, because reality didn't happen that way, but she still created an experience that left you leaving the theater feeling good.

6. District 9
This ferocious allegory was set in South Africa. A massive spaceship has hovered for 20 years over Johannesburg, so the government decides to oust the alien "prawns" to a new restrictive location.

Novice actor Sharlto Copley plays a well-meaning, ineffectual bureaucrat who gets caught up in relating to the oppressed.

He gets involved in a wicked conflict.

7. Avatar
I'm unsure of how audiences in the long run are going to respond to James Cameron's new odyssey. Avatar's special effects are mesmerizing, though redundant. But beneath them beats a very liberal heart.

In Avatar, Cameron make a bold, unabashed assault on established attitudes. He promotes a new green world that cherishes nature against man's plundering incursions. I can hear the fair and balanced shreiks already.

Cameron's avatar joins Kubrick's Star Child as a transforming figure of the future.

Will audiences shoot it down or embrace it?

With Avatar, Cameron bravely bursts toward the future.

8. Pirate Radio
This is a rocking, bobbing tribute to rock and roll. It's a free-spirited, kicky romp at sea.

Loosely based on actuality, Pirate Radio is the tale of a bunch of roguish disc jockeys on a ship off the coast of Britain who play anti-Establishment rock and roll for an appreciative public ashore, despite the efforts of the government to prevent and abolish the music.

The cast, composed of first-rate actors, does some lively improvisation amidst the classic music.

Pirate Radio has one of the best ensembles of the year -- Rhys Ifans, Philip Seymour Hoffman, Kenneth Branagh, Emma Thompson, January Jones, and of course the inimitable Bill Nighy.

Director/writer Richard Curtis is smitten by rock and roll, and Pirate Radio is his rollicking valentine to it.

9. Crazy Heart
This may be the sleeper of the year. First- time feature director Scott Cooper's film is graced with a wonderful performance by Jeff Bridges as Bad Blake, an alcoholic country singer, struggling to stay on his stumbling feet.

Blake is sloppy, disheveled, and reckless, but he keeps on singing and playing in tacky venues -- bowling alleys and small dives.

A movie about the redemption of a fallen icon has only a few possible outcomes. If it's not contrived, there are even fewer.

Fortunately, Crazy Heart is not contrived. It's human to the end.

Maggie Gyllenhaal effectively plays a single mom who tries to cope with the recalcitrant singer.

Bridges once played a piano player in The Fabulous Baker Boys (1989) -- one of my favorite movies. He's discarded the tux for worn-jeans and an old car named Bessie.

Avatar cost $320 million. [Avatar cost 21,333 times as much. I think that's more than twenty-one thousand times greater. But I'm not sure. Avatar's figures broke my calculator.]

At any rate, Paranormal Activity is quite an achievement. It's an independent movie I greatly admire. What director/writer/and bottle washer Oren Peli did is remarkable.

On a tiny budget, he made a credible, intriguing, minimalist horror film.

Honcho Steven Spielberg bought the rights to remake the film, but decided to release Peli's version with a few changes.

It proved to be a phenomenon.

When I consider the ten films above, I realize 2009 was a pretty good year at the movies. Wasn't it?