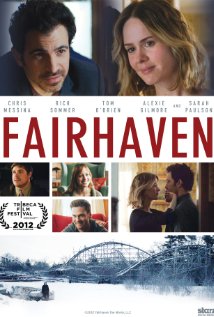 Fairhaven is one of those indie films that veer between credibility and nonsense.

It breaks into various parts. Its opening scenes stumble, but as it develops it has its partially-redeeming moments.

An early scene, in which the protagonist Jon (Tom O'Brien) takes part in a Laughter Therapy session, doesn't work.

And much of the movie's dialogue is inane: "It sounds awesome," "It's awesome," "so amazing," "Be happy," There's so much love in here. I love it," "You're going to be good. You're great," and the immortal line, "I wouldn't even know how to be me."

Writer Tom O'Brien would have been better off to scrap all those lines.

O'Brien has similarities with Tom McCarthy in that he is an actor turned writer and director. Both McCarthy and O'Brien [in his first feature] make small, personal films.

And O'Brien seems to rely on improvised dialogue. Do the "you knows"come from that? People lacking wit shouldn't improvise.

Many females who write tv scripts today have trouble writing male dialogue. O'Brien does not do female dialogue well.

In a crucial scene Kate (Sarah Paulson) puts her finger against Davy's (Chris Messina) lips to stop him speaking. That may have more meaning than O'Brien intends.

Although O'Brien's screenplay from a story by fellow-actor Messina is lacking, his direction and acting have some power and finesse.

O'Brien - at times a semi-lookalike for Timothy Olyphant - portrays Jon, who lives in Fairhaven, Massachusetts and works on a fishing boat.

Jon has seen an interview with Tom Brady on tv's 60 Minutes, in which Brady seems unfulfilled. Jon too was a QB in high school, and Brady's comment resounds with him, since he is unfulfilled.

Jon wants to leave the fishing boat and become a writer, but of course there is no evidence of his writing ability in the movie. Maybe he should have heard an interview with John Updike - that might have squelched his fantasy. Or maybe O'Brien thinks it is a reality.

As the slim plot for Fairhaven evolves, we impatiently await the arrival of Chris Messina as Davy. He plays a man who left town several years ago and has lived in Las Vegas and Arizona. He's reluctantly returning for his father's funeral. Davy feels bitter and rejected.

Can Messina save the movie?

Messina is a gifted actor who brought essential authenticity to his role in the indie Ruby Sparks (2012). But in Fairhaven his role as Davy has little range. His stare is keen, but his f-bombs fizzle. F-bombing is the last refuge of improv.

Davy reconnects with Jon and Sammy (Rich Sommer), his pals from high school. Sammy has a young daughter from a failed marriage with Kate, who has remarried. Davy and Kate share a secret. When Jon finds out about the secret, he's bummed.

Fairhaven's best section is when the three friends and two women go off at night on the fishing boat. Fairhaven basically is a movie about characters who are drifting. The boat trip gives them a direction.

The film's effective acting is highlighted by Sarah Paulson and Rich Sommer, who probably get as much humanity out of their roles as actors could.

The cinematography by Peter Simonite is evocative, capturing the wintry, snowy expanses of Fairhaven and neighboring New Bedford.

It's difficult to dislike Fairhaven, because it is a promising, earnest effort.

In one scene Chris Messina drinks from an empty cup.

If only it were brimming with sapid words.