An Open Letter to Sight & Sound 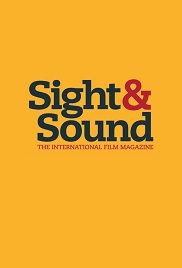 I hope to be included in the 2022 Sight & Sound decadal poll. I hope you are interested in the poll of a 50 year veteran.

When Sight & Sound first invited me to vote in their international 1972 decadal poll, I was one of two American academics to participate. The key to my invitation was that I founded and edited one of three major American film journals -- Film Heritage (1966-1978).

I'm sending the following missive as the 2022 decadal poll approaches. It's my last hurrah. More a last WTF than a hurrah.

I've never been one to promote myself. It doesn't feel right. And my supposed achievements have dwindled and faded in the last few years in my own mind.

But I do have some mementos that I appreciate. I have a signed photo in which John Wayne writes, "Tony, you caught me in print as no one has. Thanks, Duke." Frank Capra called me a "genius," but he was a merry Sicilian given to easy overstatements. An aide to Hitchcock, after my interview with Hitch, told me Hitch said some things he had never heard him say before. Edith Head smiled and asked me, "How did you get me to say all I did?" And Sam Peckinpah growled, "What kind of a fucking question is that?"

There are only two films left from my initial top ten in 1972. Citizen Kane and The General have endured for 50 years.

I am surprised if not startled that I had no Hitchcock film in my list in 1972. That was quickly remedied in 1982 with my selection of Vertigo.

I also replaced Fellini's 8 1/2 with Fellini's La Dolce Vita. La Dolce Vita's evocative scenes have stayed with me. And I voted for Jules et Jim, which I had thought was on my original ten. Both are still on my 2022 top ten.

Chaplin's The Gold Rush has been on my list since 1972, but in 2022 I decided to choose between Chaplin and Keaton, and I bowed to the latter's ingenuity.

After 1972 I dropped The Birth of a Nation, L'Avventura, The Seventh Seal, Battleship Potemkin, Les Jeux Interdits, and Bonnie and Clyde.

L'Avventura and The Seventh Seal no longer have the cache they once did. Battleship Potemkin still has potency, but lists change.

Obviously, I dropped The Birth of a Nation -- I'm not going to charge into the buzzsaw of Spike Lee, et al. I'll let Jim Agee stand alone in his brilliant defense of it.

I overrated Bonnie & Clyde, but it was one of the most powerful experiences I ever had in a movie theater. Les Jeux Interdits was a sensitive war film. Its humanity touched me.

My 2022 list for the decadal poll has six films that have been on my decadal lists for several decades: Citizen Kane, Vertigo, Jules et Jim, La Dolce Vita, The General, and 2001: A Space Odyssey -- which I think may soar to the top of Sight & Sound's list in 2022. [I had a kinship with Stanley through correspondence over the years.]

Over 50 years I have shuffled westerns -- several on Sight & Sound's poll. I've chosen The Searchers, Once Upon a Time in the West, and in one poll for Sight & Sound, a Japanese critic and I chose Peckinpah's The Ballad of Cable Hogue.

For 2022, Shane has outlived them all. When I was a boy, Alan Ladd was my favorite actor. The character and the myth still live for me.

I also added John Huston's The Maltese Falcon. I have spent years trying to fight the mispronunciation of its title. It's not Foul-con; it's Fall-con. It's another battle I've lost. But the film transcends mispronunciation.

I've added Chinatown -- the ultimate personal film. It is my favorite film to teach -- making the dualities accessible.

My final film for the 2022 Sight & Sound top ten is Philadelphia. A movie that opens with music by Springsteen and closes with music by Neil Young is a keeper. Tom Hanks merited his Oscar for his withering performance. Director Jonathan Demme captivated with a natural touch. And Dr. J appears. Who could ask for anything more? It's a film for a Philly guy -- and a human being.

There's Only One Maltese Fa...